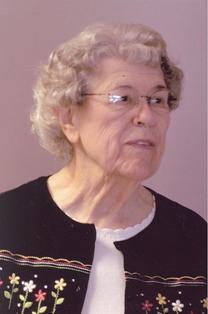 Wilma Lucille Pardee was born on October 2, 1922 in Kaukauna, to James Wilber Pardee and Jesse (Halsted) Pardee. She graduated from Kaukauna High School in 1940 and married Alvin J. Nieling in Kansas in 1943, during his service in the army in World War II. On Alvin's return from the service in 1946, the couple moved to Appleton where they remained throughout their lives. Wilma worked at Montgomery Wards for six years, and later at Sears Roebuck for 28 years. Wilma lost Alvin after 50 happy years of marriage and had another wonderful six years married to Melvin F. Rohloff. After Mel's death, Wilma resided at Ridgeview Highlands, The Appleton Retirement Community, and most recently Brewster Village where she died on October 21 2013, shortly after her 91st birthday. She enjoyed the wonderful care and attention of friends, family, and caregivers at every step of the way. She would want to extend her thanks to the many wonderful people that loved her over the years. Thanks and peace to you all.

She was an active member of First United Methodist Church since 1948 and volunteered there. She enjoyed camping and traveling, playing the mandolin and piano, and being with family and friends (especially playing cards!). She and Alvin enjoyed square dancing, and she and Mel enjoyed polkas.

Funeral services will be held at 11:00 AM on Thursday, October 24, 2013, in the prayer chapel of First United Methodist Church in Appleton, 325 E. Franklin Street, with Rev. David Farina officiating. Interment will be in Highland memorial Park, with her first husband, Alvin Nieling. Family and friends will gather in the First United Methodist Chapel on Thursday morning from 9:30 AM until the time of the service.

To order memorial trees or send flowers to the family in memory of Wilma Nieling Rohloff, please visit our flower store.