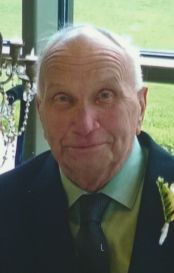 At Merrill, a fellow teacher Theresa F. Czahor, captured his eye and attention. After chasing her up three flights of stairs one day, he attained the courage to ask her on a date and a new chapter of their lives began. They were married on July 2nd, 1966, first living in Fond du Lac, and eventually moving to Sherwood were they raised their family and spent the next 50+ years together. In 1969 their daughter Mary was born, followed by Mike in 1971.

After teaching, Bill began a 30 year career working for the Soo Line Railroad from 1966 through 1996. The irregular hours, long days and nights away from home, rarely if ever stopped him from attending to his family obligations. Often times not sleeping, he would still attend Mary's piano recitals & school functions, Mike's youth basketball & baseball games, or drive Mike throughout the state to youth golf tournaments. He was very proud of Mary's scholastic achievements and Mike's bowling and golf accomplishments.

After retirement Bill and Theresa enjoyed traveling together throughout the country. Favorite stops included: the Keweenau Peninsula, Michigan, many National Parks, Alaska etc.

Bill's hobbies, pastimes, and pursuits included: acquiring some of the same vintage cars originally purchased by his father restoring them to original factory condition, spending time maintaining and driving them with his son and grandson. Bill had a great gift for numbers. He often be able recite from memory car mileages on specific dates and events as well as inform anyone who was listening of the make and model of a vintage car on TV. He also had a great vocabulary; he often educated his daughter-in-law, Laura, (an English teacher) of words she had never heard before.

He enjoyed a long competitive career of pitching horseshoes (winning numerous local and state events), as well as league bowling (with high school friends, their colleagues, and eventually family and friends). Sheepshead games frequently occurred before and after bowling as well as with his college friends from the Campbellsport/Eden area.

A highlight of his life was seeing his grandchildren (Tesha and Jon) as often as possible. He was known to state, “The kids come first.” As he had done with his own children, he attended many of their school events and programs. Favorite activities included playing: cards, Barbies (with Tesha) and Matchbox Cars (with Jon). In addition, he would often smile from a distance while they relaxed in front of a movie at his home.

2016 was a very special year for Bill as he reached a couple goals and milestones. On April 30th, Bill proudly walked his daughter down the aisle for her marriage to Fred Sperry in Madison, WI. Fred, a railroad fan, enjoyed asking him questions from his railroad career, and Bill willingly responded and informed. Two months later, he and Theresa celebrated 50 years of marriage. They reassembled many of their original wedding party, family, and friends for a day of fun, laughter, and celebration.

He is survived by his wife Theresa and their children Mary (Fred) Schlaak Sperry, Madison, WI, and Mike (Laura) Schlaak, Appleton, WI. He is also survived by his grandchildren, Tesha and Jon Schlaak, “the Twinkle(s) in his eye.”

A special thank you to the doctors, nurses and staff at St. Elizabeth Hospital, Appleton ICU who kept Bill comfortable and well cared for and upported/informed his family in his final weeks. Much appreciation to: Dr. Dogra, Dr. Bello, Dr. Flanagan and the many kind nurses and staff.

Finally, a HUGE thank you to Dr. Patrick O'Brien, who not only , through his mastery of science, his art of cardiology and the mixing and “tweaking” of medications along the way kept Bill alive and active for the past 21 years after his heart bypass and Congestive Heart Failure progression.

In lieu of flowers, a memorial will be established in his name. Proceeds benefiting: The Ron Kuen Foundation, Fox Valley Technical College, The Fox Valley Humane Shelter, and The American Heart Association.

Visitation will be at Wichmann-Fargo Funeral Home, 400 W. Wisconsin Ave. in Kaukauna on Wednesday March 29th from 3-5pm.

To order memorial trees or send flowers to the family in memory of William M Schlaak, please visit our flower store.