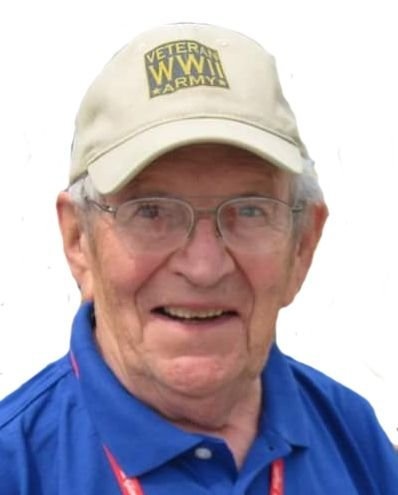 Willard Keil, age 94, of Kaukauna, entered eternal life on March 18, 2016 at ThedaCare Hospice Residence with his family by his side. He was born April 10, 1921 in Kaukauna. Willard was a World War II veteran, serving in Patton's Third Army. He appreciated being part of the Old Glory Honor Flight in 2011. He also was a fifty-five year member of Kaukauna's American Legion Post #41. Willard married Rosemary Stegeman on March 2, 1946 in Kaukauna. During their sixty-seven years of marriage, he was proud to have raised a loving, close family. Willard worked at Thilmany Pulp and Paper for thirty-seven years, retiring in 1983. After retirement, they traveled the United States. Favorite pastimes included camping, hunting, fishing, and going up-north. Willard was hard- working, quick-witted, and the best handy-man ever.

The Christian Funeral Service for Willard will be held at 11:00 AM on Wednesday, March 23, 2016 at TRINITY EV. LUTHERAN CHURCH, 804 Grignon Street in Kaukauna with Rev. David Fleischmann officiating. Full military honors will follow the service. Interment will be in Oak Hill Cemetery in Neenah. Family and friends are welcome to gather at the church on Wednesday morning from 9:00 AM until the time of the service. For more information or to share a memory of Willard, please visit www.wichmannfargo.com.

A special thanks to Pastor Mau and Pastor Fleischmann, and to the staff and hospice team at ThedaCare. May you be blessed as you blessed Willard. Thanks for the excellent care !

Gramps, you are admired and adored.

To order memorial trees or send flowers to the family in memory of Willard H. Keil, please visit our flower store.