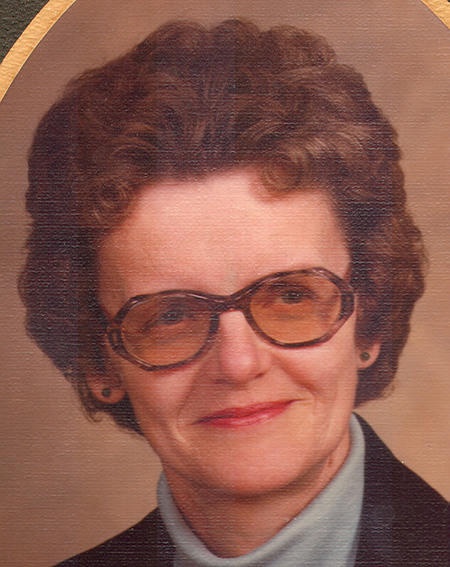 Shirley Pearl Annis, age 82, passed away on Wednesday, April 15, 2009, at St. Vincent Hospital. She was born on November 28, 1926, in Kaukauna, the daughter of the late Herbert and Eathyl (Schatzka) St. George. Shirley graduated from Lincoln High School, Manitowoc in 1945. For 30 years she worked as an operator, trainer and clerk for Wisconsin Bell until her retirement in 1982. Shirley was a member of All Saints Episcopal Church in Appleton and belonged to the Altar Guild for many years. She also participated in the All Saints Episcopal Puppet Show as a puppeteer, taught ESL for Hmong immigrants, and was a member of the Wisconsin Pioneers. Shirley loved to sew, work with crafts and was a faithful Packers fan.
She is lovingly survived by her sons David (Rachel) Annis of Green Bay, Fred (Joan) Annis of DePere, Richard (Colleen) Annis of Ft. Wayne, IN; eight grandchildren; five great-grandchildren; brother Leonard St. George of Mesa, AZ; sisters Jeanne Wegner of Franklin, IN and Betty Lou Sutton of Jupiter, FL; preceded in death by brothers Aaron St. George and Donald St. George.
A funeral service for Shirley will be held at 11:00 a.m. on Saturday, May 2, 2009, at All Saints Episcopal Church, 100 N. Drew Street, Appleton, with the Rev. Patrick Twomey officiating. Friends may call at the church on May 2, 2009, from 9:00 a.m. until the time of service.
Shirley's family wishes to extend a sincere thank you to the staff at Wyndemere Estates and St. Vincent Hospital for all their care and support for Shirley.
In lieu of flowers, please make a donation in Shirley's name to Episcopal Relief and Development, 815 Second Avenue, New York, NY 10017.
Wichmann Funeral Home
537 N. Superior Street
Appleton 54911 (920)739-1231

To order memorial trees or send flowers to the family in memory of Shirley P. Annis, please visit our flower store.