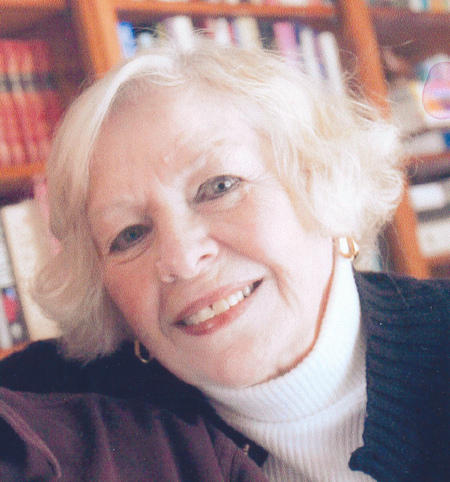 Sherry Lawson Gates of Appleton passed away on October 7, 2012 at the age of 77.

The daughter of Leonard and Lucille Lawson, she was born in Chicago and graduated from Fenger High School there in 1953. She attended Blackburn College in Carlinville, Ill., for two years, where she met Earl R. Gates. They married on Jan. 28, 1956; in their subsequent 55 years together, Sherry and Earl lived in nine states, retiring to Appleton in 1996.

Sherry exemplified commitment to a life lived in full. She and Earl raised three daughters, and in that time Sherry also enjoyed a successful career in retail sales and management, first in women's fashion, later as the manager of Family Yarn and Needlework in Seattle, WA.

Her passion for fiber arts led her at the age of 50 back to college, and she earned her BFA in Studio Art from Millikin University in Decatur, Ill.

In subsequent life as a working artist, Sherry was a founding member of Gallery 510 in Decatur, and an active member in her local chapter of the Embroiderers' Guild. Sherry was also a member of Wisconsin Visual Artists and other local and national artists' organizations. Her work was seen at Coventry Glass on College Avenue, the Trout Museum, Appleton Medical Center's Café Soleil, and in private collections as far away as Europe and Asia.

Among Sherry's favorite works were the panels that adorn the sanctuary of the Fox Valley Unitarian Fellowship – created in collaboration with good friend Francie Ginnochio.

As a member of the fellowship, Sherry also served on its board, its art committee, and the design team for its new sanctuary.

She lived the fellowship's tenets of love and compassion in particular through her volunteer work at the Martha Seikman Cancer Center, where for 11 years she offered comfort and assistance to chemotherapy and cancer patients.

The family extend their deep gratitude, and Sherry's, to the extraordinary staff of Appleton Medical Center and ThedaCare Hospice.

A memorial service for Sherry will be held at 1 p.m. on Saturday, October 13, 2012 at the Fox Valley Unitarian Universalist Fellowship, 2600 E. Philip Lane, Appleton. The Rev. Roger Bertschausen will be officiating.

In lieu of flowers, donations in Sherry's memory can be made to the American Cancer Society, the Crohn's and Colitis Foundation of America, or the National Hospice and Palliative Care Organization.

To order memorial trees or send flowers to the family in memory of Sherry Lawson Gates, please visit our flower store.