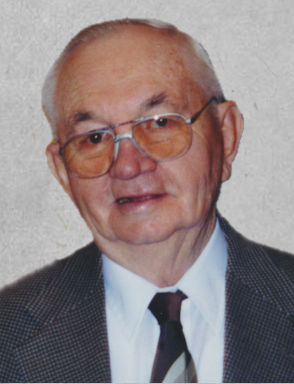 Bob Schiefelbein, age 98 of Appleton passed away on June 5, 2022 at St. Paul Elder Services in Kaukauna.  Bob was born in Kaukauna on January 29, 1924, son of the late Albert and Emma (Schaeffer) Schiefelbein.  For over forty years he was employed at Thilmany Pulp and Paper.  On November 28, 2001, he married Cecelia “Ceil” Jandourek who preceded him in death in 2011.  Bob also served his country as a member of the United States Army.

He was a lifetime member of Trinity Lutheran Church in Kaukauna, and spent many hours on the water fishing, often with his good friend – Lee Hammen.

Bob is survived by several nieces and nephews and was preceded in death by his parents, his wife Ceil and brother and sisters: Irma (Peter) Van Stiphout, Wilma (Harry) Selig, and Bill (June) Schiefelbein.

The Christian Funeral Service for Bob will be held at 11:00 AM on Saturday, June 11, 2022 at Trinity Lutheran Church, located at 804 Grignon Street in Kaukauna.  Rev. Roger Holtz will officiate, and burial will follow in the church cemetery.   Family and friends are invited to gather at the church on Saturday morning from 9:30 AM until the hour of the service.

The family would like to extend their sincere thanks to all of the caring angels at St. Paul Elder Services for taking extra special care of Bob.  We will never forget your kindness.

In lieu of flowers, memorials may be directed to Trinity Lutheran’s Radio Broadcast Ministry.

To order memorial trees or send flowers to the family in memory of Robert G. Schiefelbein, please visit our flower store.