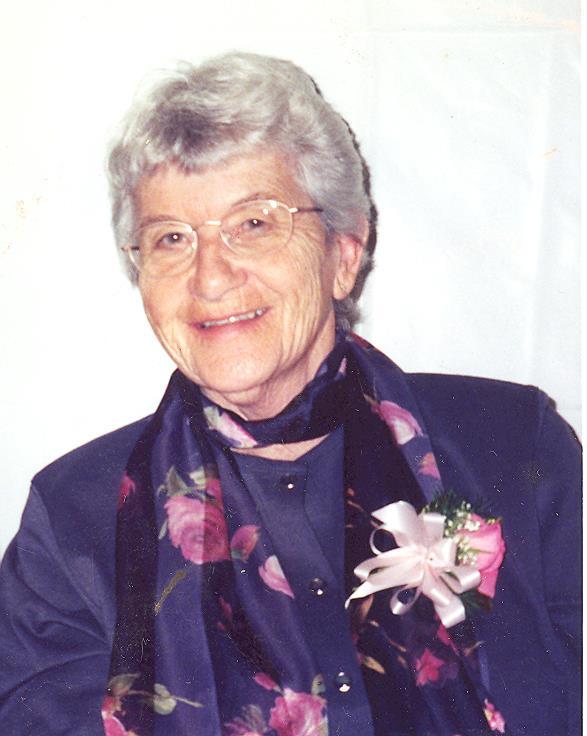 Rita McMahon passed peacefully into the presence of the Lord Jesus about 2:00 pm on Wednesday October 14, 2015 at the age of 91. She died at St. Elizabeth Hospital in Appleton as family members read Psalm 23 and sang “I Come to the Garden Alone.”

Rita was born on September 13, 1924 in Appleton, the second daughter of Edward and Susan (Dauterman) Lutz.

After graduating from high school in Appleton, Rita studied at the College for Medical Technology at the University of Madison and at Arizona State University. She served her country during WWII from 1943 until 1947 as a Pharmacist Second Class with the U.S. Navy (Waves). On June 28, 1952, Rita married Robert E. McMahon (former President of McMahon Associates) at St. Patrick Catholic Church in Menasha. They had six children together.

Bob and Rita loved to travel. They even began their honeymoon with a camping trip! The family recalls many camping trips around beautiful lakes in the North Woods of Wisconsin, as well as other parts of the country.

Later, Bob and Rita graduated from tents to motor homes, and for many years spent the winter as “Snow Birds” in Florida, Texas, California, and Mexico. Over the years, they visited almost every corner of U.S.A. They finally slowed down when they moved to Ridgeview Highlands in Appleton. Rita was widowed when Bob passed away in October 2010, after 58 years of marriage.

Faith became a vitally important aspect of Rita's life in 1972 when she gave her life to Jesus Christ. From that point on, Rita led many Bible Studies and was constantly sharing the joy of relationship with Jesus with family, friends and strangers wherever she went. Rita was also a voracious reader. Right up to the time of her death, she read five to six books a week.

Her family will miss her spunky personality, sharp mind, kindness, generosity, and sense of humor.

The funeral service for Rita will be held at 12:00 noon on Sunday, October 18, 2015 at WICHMANN FUNERAL HOME TRI-COUNTY CHAPEL, 1592 Oneida Street in Menasha. Rev. D. Michael Crow, Ph.D. will officiate. The family will receive relatives and friends from 11:00 am until the time of service. Rita will be buried next to Bob at Appleton Highland Memorial Park. Online condolences can be offered at www.wichmannfargo.com.

Rita asked that all memorial gifts be made either to the ministry of Katie (Mike) Crow or Susie (Andy) Huddleston. All gifts are tax deductible. The Crows serve as missionaries in East Asia with CRM (Church Resource Ministries). To donate, please call 800-777-6658 or go online to https://crm.webconnex.com/5941. The Huddlestons serve as mission mobilizers with YWAM and MEI (Mission Enablers International). To donate, please go online to www.MEIGiving.org. Under Giving Type, enter: “Andy and Susie” or “3000”.

The Crows and Huddlestons thank you for your gift in Memory of Rita McMahon.

To order memorial trees or send flowers to the family in memory of Rita M. McMahon, please visit our flower store.