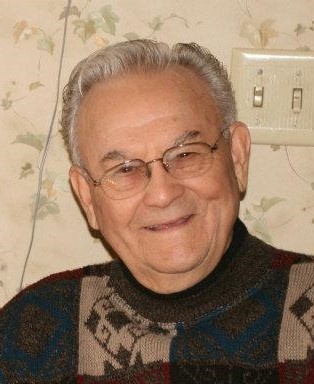 Richard J Van Handel, age 97, passed away Monday, February 21, 2022. He was born February 14, 1925 in Little Chute, WI. The son of Peter and Rose (Blaha) Van Handel. He attended St. John’s Grade and High School in Little Chute.
Richard served in WWII in the Pacific Theater with the US Army 43rd Infantry Division. A combat veteran, seeing action in Guam, Guadalcanal, New Guinea, and Luzon. Among his many commendations were four Beachheads and the Silver Star. Upon receiving the Silver Star for gallantry in action, Major General Wing said, “You receive this medal Richard, from the people of the United States, not for how many enemy lives you have taken, but rather, how many comrades’ lives you have saved.” In addition to the Silver Star, he received the Victory Medal-Asiatic-Pacific Theater Ribbon with 2 bronze Battle Stars, Philippine Liberation Ribbon with 1 Bronze Battle Star, 3 Overseas Service Ribbons and the Good Conduct Medal. Richard was Honorably Discharged in 1945.
He met the love of his life, Helen Steidl in 1946. They were wed July 3, 1948 at St Mary’s Catholic Church in Kaukauna. Together, they had three children, Susan Van Handel of Oshkosh, Stephen Van Handel of Cedar City, UT and Tim Van Handel of Fond du Lac.
Richard spent most of his working career in route sales, notably, Service Bakery, Elm Tree Bakery, and Bake-Rite Bakery. He finished his working career as a custodian at St. John’s, Menasha and St. Mary’s, Appleton. Even after retiring, Richard would still answer to “Hey, Elm Tree,” when he would be out shopping. Richard was a proud member of Teamsters 563. Upon retiring in 1988, Richard and Helen moved to Grindle Lake, returning to Appleton in 1998.
Richard had many talents, and was always willing to lend a helping hand or give advice. He was also known to have pretty good chops, and played drums for such notable Fox Valley bands as Tom Temple and the Templeaires, The Harold Ferron Orchestra, and the Alley Cats.
Richard is survived by his children. Three grandchildren; Erin (Smrekar) Plier, Andrew Smrekar and his wife Teresa, Sara (Van Handel) Anderson, and her husband Nick; as well as four great grandchildren; Raven, Ella, Jack and Noah. He is also survived by brothers, Ivol and Don, and sisters, Joyce and Lori. He was preceded in death by his parents; two brothers, Merrill and Gordon; and his wife, Helen.
There will be a Mass of Christian Burial on Friday February 25, 2022 at 10:30am at St. Joseph Catholic Church, 410 W. Lawrence Street in Appleton. There will be a visitation preceding the Mass at the church on Friday from 9:30am to 10:30am. Interment will be at Appleton Highland Memorial Park in Appleton. For more information and to express condolences, please visit www.wichmannfuneralhomes.com.
Pa, you are leaving a huge hole in my heart and I probably never will fully recover. I’m gonna miss you terribly. All my love, Puggie.

To order memorial trees or send flowers to the family in memory of Richard John Van Handel, please visit our flower store.