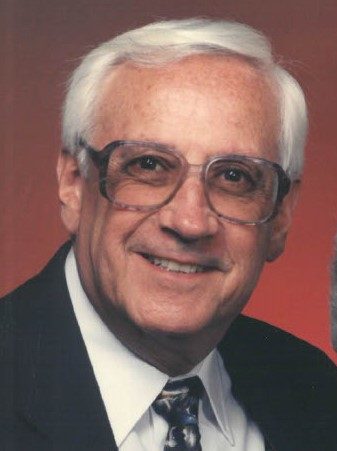 Richard James Powers passed away on September 1, 2021 at the age of 96.  He was born on August 4, 1925 to William and Thelma Powers. He attended Saint Mary’s elementary school and was a student athlete at Kaukauna High School. He enlisted in the U.S. Coast Guard and served for three years during World War II. After the war, he married his high school sweetheart Marie Romenesko. They were married for 72 years before she pre-deceased him in 2018.

Family members with whom he is now reunited include his parents Thelma and William, his wife Marie and his siblings Sherman Powers (his wife Madelle), Wilfred Powers (his wife Joan), LORRAINE POWERS DAMRO (HER HUSBAND CHARLES), Kenneth Roberts (his wife Jerry), Joe Powers, Kenneth Powers and Mary Powers (her husband Al Zirbel).

Dick had a lifelong commitment to the paper industry  and began his career at Thilmany Paper Co., Bolton and Sons and later worked for Bergstrom Paper and subsequently for Cross Point Paper Co.

Dick was also active in the VFW where he was their Commandant on two different occasions. He enjoyed traveling – especially to Ireland and he was proud to be Irish. He was a beloved storyteller and especially loved to talk about his Irish heritage and his WW II adventures.  He was a diehard Green Bay Packers fan with his precious season tickets and enjoyed watching the Packers and Notre Dame until the end. In his later years, he also enjoyed his time at the casino – win or lose –   and he took a special joy in watching his cowboy movies.

Special thank yous go out to those nieces and nephews who made his last years both enjoyable and memorable. We are also grateful for the compassionate care and support he received from Touchmark Assisted Living and its staff.  At Touchmark, he  also enjoyed nightly sheepshead games and sharing his Irish tales with all who would listen.

His ashes were interred with his wife, Marie, at Highland Memorial Park on September 7 – on what would have been their 75th wedding anniversary. On Saturday, November 6, a Celebration of Life mass and service will be held at St. Mary Church in Appleton. Visitation and conversation will begin at 10:00am and a Catholic mass with be held at 11:00am. Contributions in his memory can be made to Xavier High School Theater or St. Jude’s Children’s Hospital.

Those who wish to make a donation in his memory, it can be made to his favorite charities – Saint Jude Children’s Hospital and the Xavier High School Theater.

To order memorial trees or send flowers to the family in memory of Richard J. "Dick" Powers, please visit our flower store.