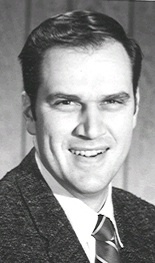 Dick was born on February 10, 1939, in Janesville, Wisconsin, the son of Arthur and Julia Fredricks. He married Annemarie (nee Sladky) on February 5, 1966.

Dick was involved in several community and national activities, including the Wisconsin Czechs.

During his formative years, Dick was influenced by his aunts and uncles who became his surrogate brothers and sisters. A close extended family includes in many cousins and their children.

Dick grew up in Milwaukee, graduated from Custer High School, where he met his future wife; attended Marquette University where he received his BS and MS degrees in Chemistry; and did post graduate work at Purdue University and Carnegie-Mellon University. With his wife and daughter, he moved, to Appleton in 1968 after accepting a faculty position in the Department of Chemistry at Lawrence University. In 1969 Dick accepted a position with American Can Company, Neenah, in the Analytical Chemistry Group and worked, also, in the Packaging Product Development Group. Without. relocating Dick worked for American Can Company, James River Corporation; Fort James, and Georgia-Pacific. He was co-inventor on five patents, author of several articles published in the chemical literature, and a speaker at seminars held by the American Chemical Society, TAPPI, and Society of Plastics Engineers.

He was active at St. Bernard Catholic Church as a Vicariate representative, member of the church council; lector and mass  server with his children. He was an active participant in several Bible Study classes at St. Bernard Church and St Pius XI Church.

Dick was very active in sports officiating.  He officiated football at the high school, college, and semi-pro levels and high school and college basketball.  He was the referee for three WIAA state tournament football games and the referee for two-High School All-Star football games. Dick founded the Fox Cities’ Officials’ Association (1969) and at various times was Secretary, Treasurer, Games Coordinator, Vice President and President of the FCOA; was instrumental in the re-numbering of situations in the National Federation Case Books (1976); worked to revise the NF and NCAA football penalty signals chart (1980); served on the WIAA Officials Advisory Committee (1982-84) during which time the officials’ classification system was reorganized; was a basketball and football columnist for Referee magazine (1981-1986); served as a speaker at National Federation conventions (1983-1988); was a member of the editorial committee of the National Federation’s Officials’ Quarterly (1995-2000) including when the magazine was founded and he had many articles published in it; authored or co­ authored several officiating books; served to review football examinations written by the National Federation; and was a speaker at and advisor to officiating clinics held in the Fox Cities and in Green Bay. Locally, Dick was a member of the “Red” Smith Committee He served on the Sports Commission of the Fox Cities Convention and Visitors Bureau where he was a spokesman for all officials. Dick was specially blessed to have been associated with honorable, honest ladies and gentlemen of extremely high caliber in his officiating and community activities.

A Funeral Mass will be celebrated for Dick at 4 PM on Thursday, October 7, 2021 at St. Bernard Catholic Church, 1600 W. Pine St., Appleton. Family and friends will be received at the church from 2 PM to the time of the mass. Entombment will take place at 11 AM on Saturday, October 9, 2021 at Holy Cross Catholic Cemetery and Mausoleum, 7301 W. Nash St., Milwaukee.

In lieu of flowers, donations may be made in memory of Dick to the Juvenile Diabetes Research Foundation (JDRF) by clicking on the memorial donation button above.

Please leave a special message or condolences for his family below.

To order memorial trees or send flowers to the family in memory of Richard E. "Dick" Fredricks, please visit our flower store.