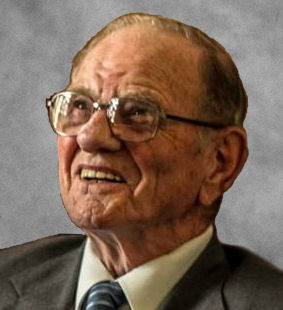 Richard “Dick” J. Huelsbeck, age 91 of Appleton, passed away May 1, 2018 at his residence. Dick was born in Menasha, WI on October 22, 1926, to the late Ida (Porsche) and Arthur Huelsbeck. He was raised on his family farm where he worked hard on chores, built his first greenhouse, and helped his mom cook for the family. Dick graduated from St. Mary’s Menasha High School and later served during World War II in Okinawa, Japan as a Navy Seabee. When he came home, Dick met and later married the love of his life, Phyllis Flanagan, on May 20, 1950, at St. Therese Catholic Church in Appleton. They became parishioners there, with Dick serving many years as an usher and a member of the Building and Grounds Committee. He was also a member of Knights of Columbus and a long-time member of the Knight’s bowling league. In addition, Dick was active in scouting and a recipient of the St. George Award in Catholic Scouting. Dick was employed at the Appleton Wireworks, Morning Glory Dairy and part-time at Gary’s Flowerland before his retirement.

He greatly enjoyed playing sheepshead and was always ready for a game. Dick was a skilled woodworker and was renowned for his greenhouse, flower beds and gardens. He lovingly offered his green thumbs and deep knowledge to many school children, church, friends and family.

The family extends their deep gratitude to the wonderful team at Ascension Hospice for the incredible care and support of Dick and the entire family.

To order memorial trees or send flowers to the family in memory of Richard "Dick" J. Huelsbeck, please visit our flower store.