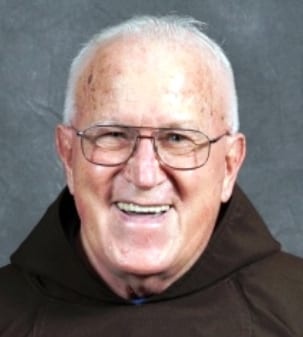 Lester Bach, Capuchin friar and priest, died on 2 February, at the age of 88.

Bach. He was invested in the Capuchin habit in 1949, perpetually professed in 1953, and ordained

For most of his religious life, Lester was involved in ministry to the Secular Franciscan Order. He

was also involved in formation ministry in the 1960s, as well as the preaching ministry beginning

in the 1970s. His ministries took him to Huntington and Crown Point, IN, Saginaw, MI, Madison

and Marathon, WI and Chicago, IL. Lester would have celebrated 70 years of religious life this

Lester is survived by his sister, Anna R. Gillis of Stevens Point, WI, numerous nieces and nephews, as well as his many Capuchin brothers with whom he lived, prayed and ministered for more than 70 years.

The Liturgy of Christian Burial for Fr. Lester will be celebrated at 10 AM on 10 February,  at St. Joseph Catholic Church,  404 W. Lawrence St., Appleton, WI 54911. Visitation will be held from 9 AM to the time of mass.  Interment will be in Holy Cross Cemetery, Mt. Calvary, WI at a later date.

To order memorial trees or send flowers to the family in memory of Rev. Lester Bach O.F.M., Cap., please visit our flower store.