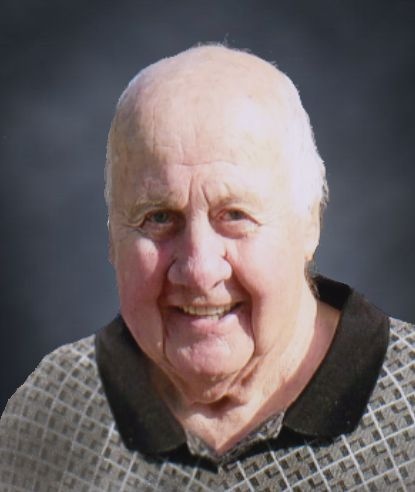 Raymond Carl Buchberger, age 91, passed away peacefully on Thanksgiving morning at American Grand Assisted Living. Ray was born on January 17, 1927, in Appleton, son of the late Clarence and Minnie (Artz) Buchberger. After graduating from Appleton West High School in 1945, he entered the United States Army and serviced during WWII. Once he returned home, Ray work for his father for several years before becoming a pressman with James River Paper, retiring after 40 years. In 1958, Ray married his love Yvonne Runnoe in a ceremony in Askeaton, WI. They celebrated 60 years of marriage this year.

Ray enjoyed the outdoors; hunting, fishing, playing horseshoes and golfing. He also enjoyed bowling and playing cribbage. He was an avid sports fan who enjoyed watching the Packers, Brewers and Badgers. He also loved to attend his children and grandchildren’s sporting events. Ray was a proud member of the Darboy American Legion 265 for 51 years, serving as Post Commander for two years. In 2015, Ray, accompanied by his son Jim, participated in the Old Glory Honor Flight. He cherished his time spent with his daughter Lynn at the casino.

Ray will be deeply missed by his wife: Yvonne Buchberger; their children: Nancy (Jon) Torma, Jim (Cathy) Buchberger, Lynn (Gregg) Weber, and Vicki (Scott) Smith; grandchildren: Troy, Renae, Heather, Abbey, Sydney, Courtney, Olivia, Gabrielle, and Liam; and great grandchildren: Mace, Elizabeth, Leo, Ethan and Isaac. He is further survived by his sister: Dolores Buchberger, and many other relatives and good friends. He was preceded in death by his parents, sister: Marie (Fred) Rettler; his first wife: Verdane and their young son Bobby. Ray is also preceded in death by Yvonne’s parents and several family members.

The Funeral Liturgy for Ray will be held at 11:00 a.m. on Tuesday, November 27, 2018, at HOLY SPIRIT PARISH- DARBOY CAMPUS, W2806 County Road KK, Darboy, with Father Bob Kollath officiating. A time of visitation will be held from 9:00 a.m. until the time of Mass. Burial to follow at Holy Angels Cemetery. Online condolences may be expressed at www.wichmannfargo.com.

Ray’s family would like to thank Gerry Wallenfang from Holy Spirit Parish for his weekly communion visits, Chaplin Stuart and the staff with Thedacare Hospice, and American Grand Assisted Living especially Tiffany.

To order memorial trees or send flowers to the family in memory of Raymond "Ray" Buchberger, please visit our flower store.