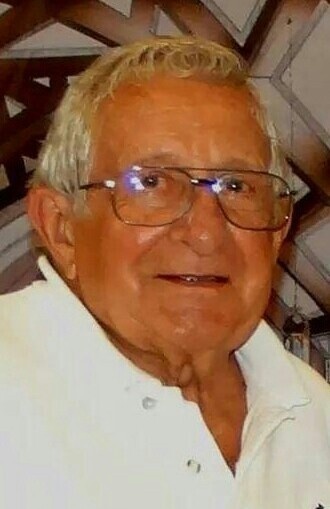 Raymond D. Podjaski, age 82, passed away on Thursday, July 17, 2014, in Neenah. On December 24, 1931, Raymond Donald was born in Norrie, Wisconsin to the late Anastazy “George” and Katherine (Barwick) Podjaski. He was a United States Army Veteran that served during the Korean War. On June 16, 1956, Raymond was united in marriage to LaVerne Johnson in Milwaukee. Raymond and his wife traveled extensively in their RV and loved camping mainly as snowbirds in Tucson, Arizona and the summer months being spent in Northern Wisconsin. He loved sitting around the campfire with his family and friends with his “chips and beer.” He also loved fishing and was a volunteer with the National Forest Service and the Bureau of Land Management of Yuma. Raymond was a mechanic by trade and later retired from the Menasha Joint School District as a custodian. He was a very artistic person and enjoyed drawing and crafting projects. Raymond was a member of the Menasha Knights of Columbus.
Raymond will be missed by his loving wife of 58 years, LaVerne; their children and grandchildren: Kevin (Lynn) and his children: Joshua (Abby) and Athena (Josiah); Karen (John) Schumacher, and children: Matthew (Maria), Christopher (Melissia), and Johnny; Kay Lynn (Timothy) Geibel, and their children: Michael and Abby; Kathy (G. Scott) Siebers and their children: Rebecca (Jacob) and Venessa; Kurt (Barb), and children: Joshua, Amanda, and Casey; 7 great-grandchildren: Emilye, Owen, Sonya Rae, Hyla Mae, Jayden, Jacob, and Ryleigh; brothers-in-law: Norman (Hazel) Johnson and Harvey (Evie) Johnson; a sister-in-law, Arlene West; and many special relatives and friends.
In addition to his parents, he was also preceded in death by his granddaughter, Kaylie Siebers; a brother, Rupert (Dorothy); and a sister, Verna (Lester) Spranger.
A Memorial Service will be held at 4:00 pm on Monday, July 21, 2014, at WICHMANN FUNERAL HOME – LAEMMRICH CHAPEL, 312 Milwaukee Street, Menasha, with Deacon Maury Reed officiating. A Memorial Gathering will be held from 2:00 pm until the hour of the service at the funeral home. In lieu of flowers, a memorial will be established. Online condolences can be offered at www.wichmannfargo.com
The family would like to express their gratitude to the ones that helped take care of Raymond; especially to the medical staff of Ministries Health-St. Mary's and the Spirit Helicopter crew in Rhinelander; the staff at the University of WI-Madison Hospital and the ThedaCare Hospice Nurses and staff.

To order memorial trees or send flowers to the family in memory of Raymond D. Podjaski, please visit our flower store.