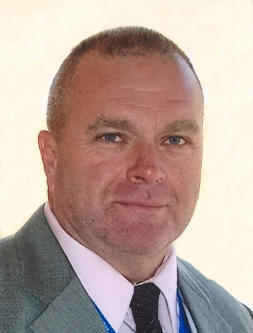 Ray Harvey, Jr., age 55, passed away after a courageous battle with cancer at his home on Saturday evening, January 21, 2012. Ray was born in Ashland, Wisconsin, on July 3, 1956, the son of the late Eileen (Kupczyk) Harvey and Ray Harvey, Sr. Ray was a graduate of the Kaukauna High School and earned his Eagle Scout award on March 31, 1974. He attended Marian University and Cardinal Stritch University where he earned his Masters Degree. On June 27, 1981, he married the love of his life, Lisa Vander Loop, at St. Aloysius Parish in Kaukauna. The couple was blessed with four children.

Ray began his employment with Albany International's Menasha plant in 1977 as a weaver, and worked his way up through various positions. Later Ray became Plant Manager for Appleton and in 2009 Plant Manager for the Albany facilities in Kaukauna and Menasha. Ray had a great work ethic – all of his coworkers respected him deeply. Ray lived life to the fullest. He loved to attend Packer games, tailgate parties, and enjoyed traveling – especially to Hawaii, Italy, and Key West. He carried nothing other than wonderful memories from his trips. During the summers, you could always find Captain Ray out on his boat – “2 Much TangueRay” ! He loved to work out at Ghost Town Fitness, where he exercised several times each week with his lifting partner Don Jansen. Ray enjoyed sharing his talent and passion for weightlifting with the athletes of Kaukauna High School. He had many champions among them, including his nephew Kyle Harvey, most importantly his daughters, Jen and Leah, who won State Championships.

Ray had much to be thankful for. He appreciated seeing is son play varsity football at Kaukauna, was able to walk his daughter Dana down the aisle at her wedding in October of 2011. His greatest joy was spending time with his granddaughter, Peyton Rae, whom he loved dearly.

The family would like to extend their thanks to all of the caregivers who watched over him during his illness. This includes the many nurses at the University of Wisconsin Hospital in Madison, the staff of Theda Care At Home, and special thanks to Jen Haggland. We will never forget all that you have done for us.

To order memorial trees or send flowers to the family in memory of Ray E. Harvey, Jr., please visit our flower store.