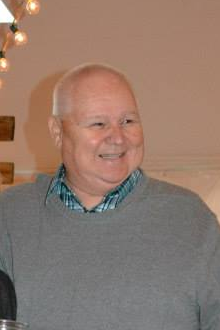 Peter August La Valle, age 74 of Menasha, passed away on Monday, October 23, 2017 after a short battle with an aggressive brain tumor. Pete was born on November 24, 1942 in Neenah to the late Louis and Dora (Burr) La Valle. He graduated from Menasha High School in 1961 where he lettered in football, track and basketball and was awarded the Athlete of the Year award. During high school, Pete met his wife of 52 years, Patricia Remmel. They were married in August of 1965 and after a few years they were blessed with two children.

After graduating, he started working for Geo. Banta Co. where he worked for 43 years before retiring as a four-color pressman. His love for the Packers took him to the “Ice Bowl” and he sat right behind the goal post where Bart Starr scored the winning touchdown. Fortunately, on October 21, 2017 he was able to relive that day with his family at the Packer Hall of Fame.

Pete was fondly known as “Mr. Pete” in the neighborhood. He loved fixing bikes for kids in the neighborhood and also fixing bikes to donate to underprivileged children. We called him the modern day “Banjo Joe Gazecki”. Pete was an active, 30-year member, of the Menasha Lions Club. His dedications to the Lions included many volunteer hours in Rosholt repairing glasses for the needy. He also volunteered for Meals on Wheels with Pat for ten years. Pete was a modest, honest and giving man who never wanted any recognition for his selfless deeds. He especially enjoyed attending most of his grandchildren’s many activities and numerous family gatherings.

The Memorial Service for Pete will be held at 5:00 PM on Sunday, October 29, 2017 at WICHMANN-LAEMMRICH FUNERAL HOME (312 Milwaukee St., Menasha) followed by a celebration of life at the Stone Toad. Visitation will be held from 2:00 PM until the time of service. In lieu of flowers, memorials may be directed to the family and will be donated to the Lions Club and Brain Cancer Research.

The family wishes to thank the nurses and staff at The Bridges of Appleton, Theda Clark Hospital-Neenah, Oakridge Gardens and ThedaCare Hospice for the loving care given to Pete.

To order memorial trees or send flowers to the family in memory of Peter La Valle, please visit our flower store.