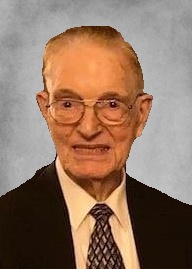 Peter was born on September 25, 1934 in Combined Locks, WI, the son of the late Albert & Waltera (VanNuland) Bekkers.  He grew up in Freedom, WI.  On October 5, 1957 he married his best friend, Carol Nisler at St. Charles Catholic Church in Charlesburg, WI. Together they raised 8 children.  He and his wife lived in Appleton for 7 years before moving to Greenville where they currently lived.  He joined St. Mary’s Parish and immediately became very involved with the church and school where all their children attended and from which all graduated.  He devoted his life to leaving the world a better place than when he came into it.  His involvement didn’t stop but continued for many years wherever he and Carol could be of help.  Peter loved: first his God, second his wife, family & friends and third his country, in that order.  He was employed at American Can Co. for 10 years, H & R Block for 10 years and then worked at Curwood (Bemis) for 23 years until his retirement in 1990.  He also had his own business doing public accounting and preparing personal & business tax returns from their home for over 50 years until he sold the business in 1998.  He remained active working as an employee during the transition for an additional 6 years, until mid-2003.  He also co-founded The National Association of Tax Professionals (NATP) in 1979 serving on its board of directors for 14 ½ years and was a charter member.  He has devoted his retirement years volunteering at a number of organizations as his contribution to his fellowman.  He and Carol were members of the Secular Franciscan Order (Third Order of St. Francis), having been professed in 1960.  He kept busy doing many volunteer activities over the years and especially during his retirement.  He promised himself that he would spend his retirement years living life to the fullest.  He took every opportunity to help people.  His biggest joy was spending time with his wife and family whom he loved and cherished so very much.  He sang with the Appleton MacDowell Male Chorus, the Resurrection Choir in Appleton, he volunteered at the Thompson Senior Center, Theda Clark Hospital Auxiliary and was involved with the Fox Valley Warming Shelter, Inc., Widows of Prayer, Beacon of Hope and served on the LaVerna Regional Executive Council of the Secular Franciscan Order.  He enjoyed traveling with Carol.  Together they’ve traveled through all 50 states as well as many countries in Europe, Asia and Africa.

In addition to his parents, Peter was preceded in death by three sons, Timothy, Richard, and Mark, a grandson Adam Haske, two brothers, Albert Jr. and John, a sister, Hattie Berg, a daughter-in-law, Judy Bekkers, and brothers-in-law, Bob Schumacher and Donald Nisler.

The visitation for Peter will be at Appleton’s Wichmann Funeral Home, located at 537 N. Superior Street on Tuesday, December 21st starting at 4:00 PM and concluding with prayer service beginning at 7:00 PM. The funeral mass will be at St. Mary’s Catholic Church in Greenville on Wednesday, December 22nd at 11:00 AM with visitation at 9:00 AM until time of the service with Fr. Michael Warden presiding.  Committal will take place in the parish cemetery following the service. In lieu of flowers, donations may be made to Pillars Adult and Family Shelter of Appleton in Peter’s name.

Peter’s family would like to thank the staff and caregivers at Rennes Health and Rehab, Heartland Hospice, and Theda Care Appleton for their loving care for Peter.

You may view Peter’s funeral mass live by clicking a link on this page on Wednesday morning.

To order memorial trees or send flowers to the family in memory of Peter J. Bekkers, please visit our flower store.