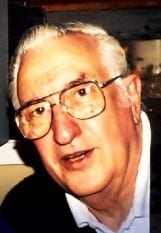 Peter A. Clark, age 95, of Menasha, WI, was called to the loving arms of his Lord on Saturday, May 9, 2020, at Theda Clark Medical Center, Neenah, WI.
Peter was born August 16, 1924, to the late Peter P. and Mary (Frederick) Clark. He was a 1942 Menasha High School graduate and served his country in the United States Marine Corps as a Paratrooper in WWII. He married his high school sweetheart, Mildred Remick, on April 24, 1947, at St. Mary Catholic Church, Menasha, and raised five children together. Pete and Millie owned and operated the Island Cleaners until their retirement in 1989. In his spare time, Pete loved to hunt, golf, and bowl.
Pete will be missed by his children, Peter L. Clark and Christine (Jim) Lewandowski; grandchildren, Claudine (Michele) Clark, Jason Clark, Jenny (Todd) Dollevoet, Brad (Betty) Lewandowski and Steven Clark; great-grandchildren, Alexander, Elizabeth, Frank, and Prior; step-great-grandchildren, Taylor, Lauren (Matthew) and Shelby (Brandon); brother in law, John Remick; and many other friends and relatives.
In addition to his parents, Pete was preceded in death by his loving wife, Millie; three sons, Fred, Mark, and Jeff; sister, Evelyn (Robert) Porath; and two sisters-in-law, Joyce (Jackson) Grode and Barbara (Jack) Engfer.
Due to the current circumstances, a private family service will be held. Inurnment will be in St. Margaret Catholic Cemetery, Neenah, WI.
The family would like to extend a thank you to the nurses and staff at Theda Clark Medical Center (6th floor) and Theda Care at Home Hospice, especially Beth, who took such good care of dad and was there for all of us in our time of need.
Please leave a special message or condolences for Peter’s family below.

To order memorial trees or send flowers to the family in memory of Peter A. Clark, please visit our flower store.