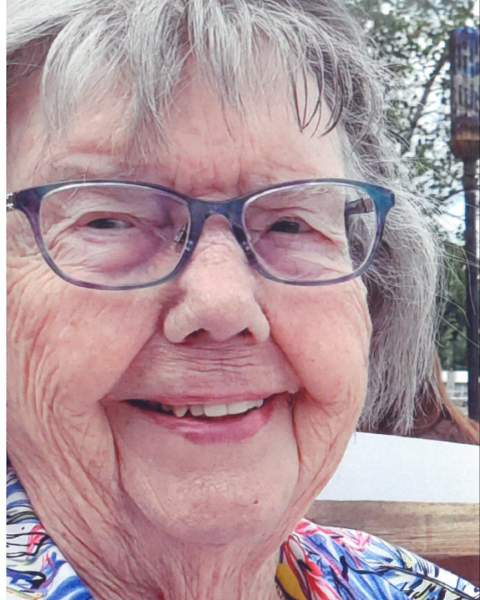 She was raised in Mattoon, WI and graduated in 1943, where she was honored to have been chosen to be the first Badger Girl State from Mattoon High School. She married Raymond Weeks, on October 19, 1946, and moved to Antigo. For better opportunities, in the mid 50’s, the family moved to Greendale, WI where she spent the next 13 years, next moving to Janesville, WI and then to Madison, WI.

For twenty-five years, she was very blessed to enjoy a wonderful retirement, having a home in Sun City, AZ for the winter and a home on Fence Lake in Lac du Flambeau, WI for the summer. She continued to live in Arizona after Ray’s death in 1998, and returned to Appleton, WI in 2006 to be closer to her children.

Pat was born before her time. She was a feminist before the word became commonplace. In the mid 1940’s, at the ripe old age of 20, she and a girlfriend took the train out west and then north to Canada to see the world. Her sense of adventure continued throughout her life. She traveled around the country, including Hawaii for her 25th wedding anniversary and vacationed in Europe twice. Her heavy foot behind the wheel got her in trouble on more than one occasion, once resulting in a warrant for her arrest (so she was told) in a certain state because she decided to ignore the speeding ticket she had received (she eventually paid it).

A 75th birthday present was flying over the Fox Valley in a hot air balloon. At age 89, she parasailed in Key Largo, FL and for her 90th birthday she took an Alaskan cruise.

Always wanting to try new things in the kitchen, she perfected her own Bloody Mary mix. Her mantra became, “It’s five-o’clock somewhere.” And who could forget her famous peanut butter pie, a favorite of the grandchildren and great grandchildren.

She was always up for a bridge game and made sure she belonged to bridge groups in whatever city she lived. She was an ace player and fellow participants always wanted her as their partner for the many bridge marathons in which she participated.

She will be missed by her two daughters Cindy (George) Brandenburg and Debby (Skip) Loofboro, grandchildren Lisa (Aaron) Pingel- DeKelver, Sara Heckel, Christopher (Becky) Loofboro and Matthew Loofboro as well as great grandchildren Allison Pingel and Alex Pingel. She will also be missed by nieces Janell (Jim) Solinsky, Sandy (Jeff) Peterson and Verjean Smith as well as other good family and friends.

She was preceded in death by her husband Raymond and 10-year-old daughter Cheryl Jean "Cherry" and sister, Joy Smith.

A very special thank you to the caregivers at Country Villa Memory Care and Moments Hospice for the special care and compassion you gave to mom.

Marilyn Berg, from First United Methodist Church, Appleton, you became a trusted friend to Mom and always found time to visit. Your gift of lifting her spirits when she was down will never be forgotten. Thank you!

Mama, you fought a good fight. You can now rest and finally see Daddy and Cherry. Have a margarita on us!!

A memorial service for Pat will be held Saturday September 24, 2022, at 2:00pm at Wichmann Funeral Home, 537 N Superior Street, Appleton. Friends and family may gather at the funeral home from 1:00pm until the service start. Pat will be laid to rest in Woodlawn Cemetery, Mattoon, WI at a later date.

To order memorial trees or send flowers to the family in memory of Patricia Jeanne Weeks, please visit our flower store.