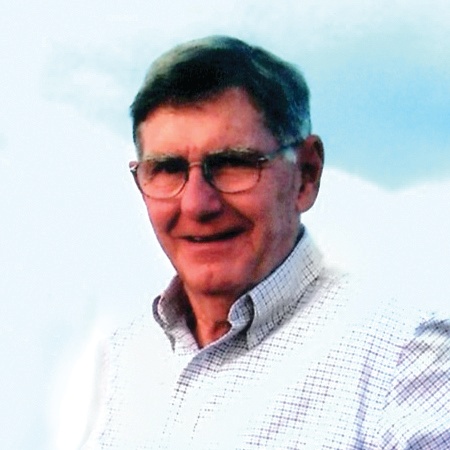 Tony passed away peacefully with his family at his bedside on August 3 at age 93.  Although born in Chicago, he moved to Appleton as a baby, but he always considered himself a native Appletonian.  Tony attended Edison School, Roosevelt Jr. High and Appleton High School, and was active in Boy Scouts and at All Saints Episcopal Church – where he was the longest-active parishioner.  At Lawrence University he was an Economics major and a member of Delta Tau Delta Fraternity.  While reading the sports pages at the library, he met the love of his life, Arden Polzin. They married on August 16, 1952, so they were about to celebrate their 70th wedding anniversary.  While still in school, his father died, and Tony took over the Peerless Paint Manufacturing Company, which he ran for 35 years before becoming an independent paint representative, still working until a few months before his death.

Tony was active all around Appleton including  the YMCA Y’s Men, the Riverview Country Club, and the Appleton Downtown Rotary Club where he was President, a District Assistant Governor, and a Paul Harris Award recipient, as well as their longest-continuous member.  He was also Chairman of the Outagamie County Red Cross.  After losing his son Bill to cancer, he shifted his efforts to the American Cancer Society where because of his fundraising success, he became an Honorary Life Member of the Wisconsin Division of the ACS and earned the St. George National Medal, given to outstanding community volunteers in recognition of their distinguished service to the ACS.

After his “retirement,” Tony and Arden moved to their cottage on the lake in Waupaca, WI, which was their favorite place on earth right up to the end. There he helped found the Rotary Club of Waupaca. He was also a hospice volunteer, where he was often older than the patient he was supporting.

Tony was proceeded in death by his parents Arthur and Edith Kuehmsted, and his three sisters:  June Jorgenson (John), Dorothy Bates (Duane), and Elosie Lenz (Ralph).   In addition to his beloved son Bill, Tony was the proud father of Barbara Bostrom (Robert) and Peggy Reitz (Phil), and adoring “Bop” to his grandchildren Anne Bailey (Aaron), David Reitz (Kristen Linscott), Elizabeth Espinosa (Franco), Bill Reitz and Scott Bostrom.  And he was lucky enough to meet his seven great grandchildren.

Visitation will be held Monday, August 8 from 2-5pm at Wichmann Tri-County Funeral Chapel, 1592 Oneida St, Menasha, and services Tuesday, August 9 at 11am at All Saints Episcopal Church, 100 N. Drew St. with burial following at Riverside Cemetery.

In lieu of flowers, the family requests donations to the Bill Kuehmsted Memorial Scholarship at the Community Foundation for the Fox Valley Region, 4455 W. Lawrence St., Appleton, WI 54914, or at www.cffoxvalley.org.

To order memorial trees or send flowers to the family in memory of Owen "Tony" Kuehmsted, please visit our flower store.