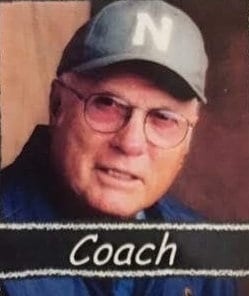 On Saturday, March 28, 2020, Norman “Coach” Tebo peacefully passed away at  Cherry Meadows Hospice. Norm was born on the Fourth of July in New York City. He was lovingly raised by his maternal aunt and husband, Helen and Ervin Tebo in Oshkosh, Wisconsin. His enlistment in the US Navy ceased at the end of World War II, and Norm returned to Oshkosh to enroll in the School of Education at UW-O. It was here that he met Nancy Swanson of Mosinee, Wisconsin, his future bride of 66 years.  He played on a strong UW-O tennis team, competing successfully in conference, state and divisional competition.

Norm began his teaching career in various communities in Wisconsin, including Crandon, Suring and Mosinee. Norm and Nancy married after her graduation and settled in Mosinee. After marriage and growing a family, Norm looked for greater opportunities in education. He was recruited by then Appleton School District Administrator Spears to pilot a program at Wilson Junior High, to better provide for elementary students whom might have difficulties transitioning to junior high school.

In the mid-1970’s Norm became the Appleton West Boys Tennis Coach. When federal Law Title IX opened the door to girls for equitable opportunities in interscholastic sports, Norm also became coach of the West girls’ tennis program. He was one of the first, if not the first male coach of an interscholastic girls’ high school team. Norm’s coaching energy and schedule was daunting – West girls’ tennis in the fall, 9th grade basketball at Wilson in the winter, West boys’ tennis in the spring, plus more tennis in the summer. Norm helped organize a strong Appleton Recreation Department tennis program in the 60’s and 70’s and also coached Babe Ruth baseball. He really was no longer our Norm but THE COACH! Based on Coach’s achievements he has been inducted into both the Wisconsin Tennis Coaches Hall of Fame and the Fox Cities Tennis Hall of Fame.

In retirement, Coach and Nancy purchased and refurbished a small church camp in Mt. Morris, Wisconsin (renamed Camp Tebo) which soon became a beautiful get-away for extended family and friends from all over the world. Friends might remember the Coach at Camp either selling his antiques in “Coach’s Corner Antiques” or scooping ice cream at the “Sunflower Ice Cream Shop”. Coach and Nancy were also Alabama snowbirds and loved their winters in the Gulf Shores area.

Norm is survived by his wife: Nancy and four children: Dave (Barb) Tebo, Kris (Rick) Sievert, Paul (Kathy) Tebo, and Kay Martin. His grandchildren and great-grandchildren were a huge part of Coach’s life and permanently granted him the Coach nickname when he showed his disdain for being called Grandpa. They include: Alicia Duffy (Kevin, great-grandson Lucas), Megan and Libby Sievert; Erin Graves (Chaz, great-grandson Walker), Bret Tebo; Davy, Kyle Tebo, and Zach Martin.

Norm was preceded in death by his youngest son, Michael.

A celebration of Coach’s life with family and friends is planned for a later date.

The family is creating a Coach Tebo Memorial Scholarship Fund. In lieu of flowers, past students, team members and friends who might like to honor Coach’s legacy and commitment to teaching with a gift may send a check titled “Coach Norman Tebo Memorial” to 2600 Heritage Woods Dr., A122, Appleton, WI, 54915.

“The torch is passed”

To order memorial trees or send flowers to the family in memory of Norman "Coach" Tebo, please visit our flower store.