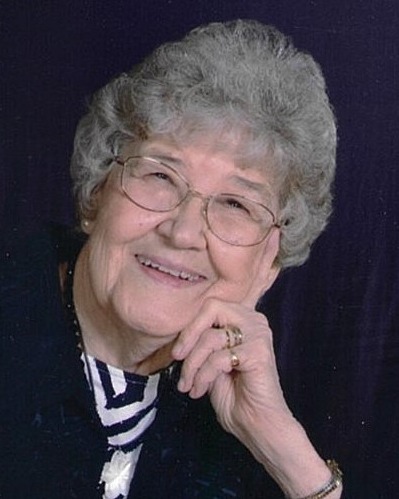 Myrtie Jane Krueger, age 89, of Appleton was born into eternal life November 18, 2022 surrounded by her loving family.  Myrtie was born in a farmhouse in Maple Creek, near New London on July 12th 1933.  As the youngest of James and Myrtle (Law) Ellefson, she enjoyed being the baby of the family.  She met her lifelong sweetheart Russell Krueger at the Hortonville homecoming dance at the age of 15. The two were married on January 3, 1951.  Unbelievably, the very next day, he was called to active duty with United States Army – but Myrtie’s love and support never wavered.  She spent a few years after high school working at Appleton Camera Supply where she developed photos, however, her longest and most rewarding job was being a mother and homemaker.  As a mother to 5 children she spent her days caring for her family.  In her spare time she also worked as a seamstress.  From 1966 until 1979 Myrtie was heavily involved in the Americanos and the Drum and Bugle Corps in a variety of ways.  After her children had grown she volunteered at Bargain Garden in the jewelry department and made her famous peanut brittle.  She also spent many years volunteering for the Aid Association for Lutherans alongside Russell, organizing dinners and raffles.

She was preceded in death by her husband Russell in 2016, daughter Kay in 1996, daughter-in-law Dawn in 1994, grandson Brandon in 1991, as well as seven brothers and sisters.

From Myrtie's own notes: "My life was full of music beginning at age 3.   In first grade I started singing solo and later I was in church choirs, school choirs, weddings and funerals, then onto AAL (now Thrivent) choir, Chaminade, and several chorales.

I was a member of St Matthew Evangelical Lutheran church, the Dorcus Society and Ladies Aid, holding offices in both. I enjoyed being useful wherever and whenever I was needed.   My earthly wealth was in family and friends."

The Christian Funeral Service for Myrtie will be held 11:00 AM on Wednesday, November 23, 2022 at Wichmann Funeral Home, located at 537 N. Superior Street in Appleton, Rev. Jon Kuske officiating.  A visitation will be held on Tuesday, November 22, 2022 from 5:00 PM until 7:00 PM at Wichmann Funeral Home, and again on Wednesday morning from 9:00 AM until the hour of the service.  Myrtie will be placed at rest with her husband Russell at Highland Memorial Park.

Myrtie's service will be livestreamed for those unable to attend.  You may click here https://client.tribucast.com/tcid/9587092771 or click the livestream link in the service information below.

To order memorial trees or send flowers to the family in memory of Myrtie J. Krueger, please visit our flower store.