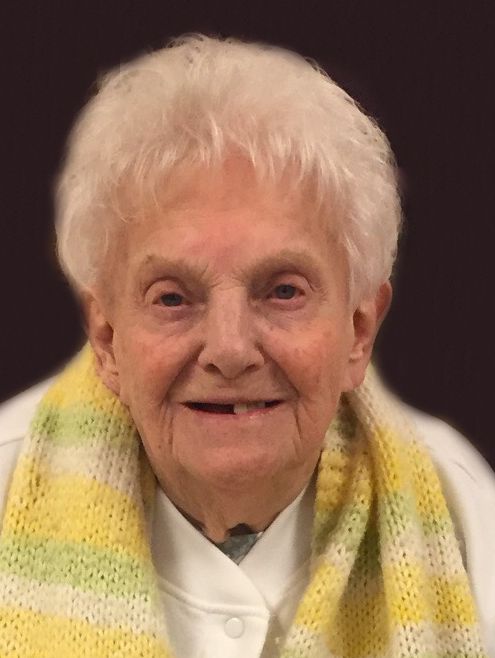 Mildred “Millie” M. Gerrits, age 94, of Appleton, passed away peacefully on Thursday, September 13, 2018 at ThedaCare Regional Medical Center. She was born on June 20, 1924 in Appleton to the late Raymond “Ray” and Johanna (Peters) Hawley. She was the oldest of three children. At the age of twenty she met the love of her life, Robert “Bob” Gerrits and they married on November 30, 1944 at Sacred Heart Catholic Church in Appleton. Bob and Millie celebrated over seventy years of marriage before Bob passed in 2015. She took pride in her twelve children, twenty-eight grandchildren and fifty-six great-grandchildren and thirteen step-grandchildren. She was a member of St. Bernadette Catholic Church in Appleton.

The Funeral Liturgy will be held on Tuesday, September 18, 2018 at 11:30 a.m. at ST. BERNADETTE CATHOLIC CHURCH, 2331 E. Lourdes Drive in Appleton. Visitation will be held on Tuesday at church from 9:00 a.m. until the time of Mass with Fr. Don Zuleger officiating. Millie will be laid to rest next to her husband, Bob, at St. Joseph Cemetery in Appleton. In lieu of flowers, a memorial fund will be established in Millie’s name. Online condolences can be shared at: www.wichmannfargo.com.

The Gerrits Family would like to extend their gratitude to Rennes Health employees for the past several years; where Millie made her home after the passing of her husband. As well as a special thank you for the wonderful hospitality from the fifth-floor staff at ThedaCare Regional Medical Center in Appleton.

Mom always saw the good in all of us; she held this family together. Her strength and courage will live with us forever. Love your family

To order memorial trees or send flowers to the family in memory of Mildred "Millie" Gerrits, please visit our flower store.