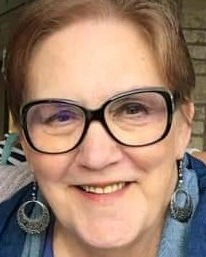 It's with heavy hearts we announce the death of Michele King. We knew her as Mickey, Mike, Mic, Mickster, Mom, Grandma and Graham Cracker. She was a spirited, strong woman who was quirky, loving, opinionated, thoughtful, compassionate, sometimes foul-mouthed and definitely free spirited; entirely irreplaceable. She loved Christmas and decorating, and had a serious nutcracker collection. She made a point to make every holiday special for the kids. Mickey was a great cook who made a mean meatloaf, an incomparable apple crisp, and had frequent requests for her cowboy cookies. While her husband teasingly referred to any casserole she made as "bah-fahn-goo," we lapped it up with gusto.
She died unexpectedly from illness, surrounded by her family. She was born in Los Angeles, CA on April 10, 1945 and grew up in St. Louis Park, MN after the unexpected death of her father, Art Turton in a plane crash. She later earned a B.A. in Art Education at the University of Minnesota and began a career as an elementary art teacher in Appleton, WI. She met her husband, Ron King and eloped within a month of their meeting. Michele's mother, unaware of that marriage, helped arrange a “proper” Catholic wedding two months later. They spent the rest of their marriage trying to remember which anniversary to celebrate. She was married to Ron 42 years until his death in 2009. Recently, she remarked about one of her drawings of two cardinals that represented her and Ron; we'll think of them as rejoining when we see a pair of cardinals. Birds and flowers were her favorite natural things and are the most prominent subjects in her later art. An extremely talented artist, she explored many media, and consistently gravitated toward drawing and watercolors.
Mickey gave birth to their son, Tom in June 1970. In 1976, she gave birth to their daughter, Tia. Michele was the mom who gave the rides, baked the cookies, and hosted the parties. Her grandchildren were central to her happiness. Her calm nature made animals and children gravitate toward her.  One of Mickey’s favorite moments was watching Miles as a toddler dancing in some automatic sprinklers that had unexpectedly turned on in the early morning. Her grandchild Macy chose Mickey as the second person they felt comfortable to hold them as a baby.  One of the last things she said was “beautiful” about a drawing of some flowers Ryan sent to her this Christmas. Carter had a close bond with Grandma; helping her, baking with her and running errands -peas in a pod.
Early in her career, Mickey taught art at a local high school and was called 'Ma' by many of her students. She explored selling her artwork at a women's creative collective for a few years. Mickey worked in various media; wood burning, glass etching, quilting, calligraphy and ink/paper. Her next adventure was in retail, managing a craft store. Missing her connection with students, she returned to teaching and landed at Seymour High School where she was nominated for a Golden Apple Award. She approached teaching as being beyond the classroom, a true humanist who believed in the inherent dignity and worth of all people. She was a fierce advocate for equality in race, gender, sexuality and social justice issues.
She was very creative and inventive to solve problems in unexpected ways - like duct tape on Birkenstocks, or a vanity mirror contraption. Mickey was your go to gal for any school project for things like homecoming or a class; yours was sure to be an original.
Michele was preceded in death by her husband, Ron King, father Arthur Turton, mother Ruth Caldwell, nephew Gregory Turton, niece Colleen Turton. First rate mother and grandmother, survived by children Tom King (Erin McKee); daughter Tia King (Peter Lawrence); her grandchildren Miles Saunders, Macy Saunders, Ryan King and Carter Saunders. Also survived by brother Gary Turton (Deanna); sister Sandi Levesque; and brother Ward Caldwell (Relandra), nephews Mark (Miyun) Turton, Chris Levesque, Josh Caldwell and niece Katrina (Carl) Benson. We’ll miss you terribly and see you on the other side.
There will be a visitation with the family Thursday, January 12th 2023 from 4-7 pm at Wichmann Funeral Home 537 N. Superior Street. Final resting place will be at Riverside Cemetery.

To order memorial trees or send flowers to the family in memory of Michele M. King, please visit our flower store.