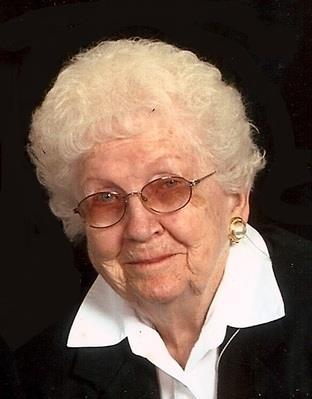 Your wallet might be a little lighter due to a game of cards or Shake of the Day, but you wouldn't leave Mary Peotter's empty-handed. You'd be walking out with home baked cookies, banana bread or her frosted brownies, which set the bar for chocolate clinging to the roof of your mouth.Born Mary Louise Schwarz on March 8, 1920 in American Falls Idaho, Mary's first four years read like a dime store novel. A playful redhead, she would ride along on the family buckboard to visit cousins out on the range, while her dad (Leonard Schwarz) ran a barbershop on the first floor of his brother's brothel. It was here that she watched as her mother Elsie Schwarz fed the Blackfoot Indians who came to their door, hungry. That notion of feeding others stayed with her.In 1924 the family (Lionel, Bob, Dorothy, Essie and later Rosie) moved back to the Appleton/Hortonville area.

Mary met William “Bud” Peotter at Wilson Junior High School where he sat behind her. This was not the best of circumstances as his teasing didn't leave her with a favorable impression of him so much so that in her own words, “I detested him”. But apparently the teasing became more endearing because when another fellow had asked her to marry, she asked Bud what he was going to do about it. Bud got the message and they married in 1940.

Her children (all surviving) Janeen (James) Keen of Green Bay, Thomas (Susan) Peotter of Oshkosh and Patti Sue Peotter-Bettes (Lee Bettes) of Bradenton, Florida, and seven grandchildren were the focus of Mary and Bud's life. The two of them provided child-care (including traveling to Europe to help babysit), meals for their working children and proud support at all the grandkids'; John (Tina), Jody (Jamie), Jay (Teresa), Brian (Kellie), Sean (Tara), Matthew and Morgan's school and extracurricular events.They also found time for travel, lots of card playing and Mary's sewing. Bud passed away in 2007 and Mary remained in the Appleton area. Mary passed away Thursday night, January 21 at Rennes Health and Rehab Center of Appleton.

She outlived all her siblings and is survived by 10 great grandchildren.But wherever she lived and had a kitchen, her home was filled with the smell of baking–it was just what she did, fed people.

The funeral liturgy for Mary will be held at 11:00 AM on Friday, January 29, 2016 at St. Thomas More Catholic Church, 1810 N. McDonald Street in Appleton, with Fr. Gerald R. Falk officiating. Entombment will take place at Highland Memorial Park. Family and friends are invited to gather at the church on Friday morning from 9:00 AM until the time of the service.

Contributions in honor of Mary may be made to St. Thomas More's Care Ministry to continue their work of visiting the elderly.

To order memorial trees or send flowers to the family in memory of Mary L. Peotter, please visit our flower store.