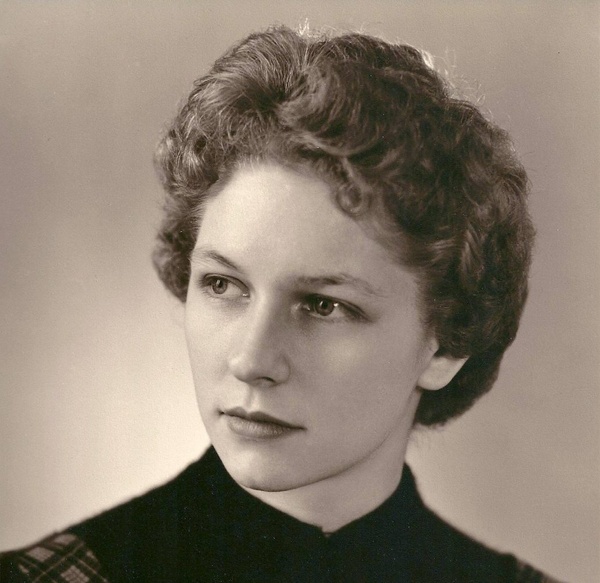 Mary Anne Spencer was born (as Catherine Jepson) in Brooklyn, New York, on April 6, 1936, and adopted as an infant by Minerva Bradstreet Spencer, a nurse, and Clifford Wayne Spencer, an architect and artist focusing on oil painting (scenery) and furniture making.  She grew up as an only child due to the Spencers having lost a son, William Wayne, as an infant in 1934.

The family lived in Brooklyn for a short time and went to the 1939 World’s Fair in Queens, New York, before moving to Quebec, Canada.  They later moved to Maryland, a small town in Otsego County, New York and finally settled in Little Neck, Long Island.  Early on, Mary Anne developed an interest in ballet and tap dance, and a love of dogs.  Mary Anne and her cousin, Manon Bradstreet were of similar age and played a lot together culminating in a friendship that lasted the rest of their lives, including letter writing when they weren’t near each other geographically.

Mary Anne’s father passed away when she was eleven.  Not long after, she, her mother, and her grandmother, also named Minerva, headed for the West Coast.  Her mother took nursing jobs in Salem, Oregon, and Los Angeles, California, to support the trio, before settling more permanently in Corvallis, Oregon.   They arrived just prior to Mary Anne’s senior year at Corvallis High School.  It was here that she was reunited with her cousin, Manon, who had also made a similar trip west with her own parents.

Mary Anne’s grandmother died right around the time that Mary Anne graduated from CHS in June of 1954.  Three years later, her mother also passed away.

On March 7, 1958, Mary Anne Spencer married Vance Eugene Brown, who was also a 1954 CHS graduate.  Cousin Manon Bradstreet was her Maid-of-Honor.  Mary Anne and Vance had two sons, Vance Evan (1958), and Kevin Michael (1960).  They moved to Eugene, Oregon, in 1968, then adopted an infant daughter, Jennifer Lynn, in 1970.  The family took up canoeing and sailing as favorite pastimes, buying a canoe and a Lido 14 sailboat.  A lot of time was spent at Foster and Fern Ridge Reservoirs.

The Browns moved back to Corvallis in the Spring of 1972, and after 22 years of marriage, Mary Anne and Vance Eugene divorced in 1980.

In her working career, Mary Anne was a dispatcher for the Corvallis office of the Oregon State Police both at the old location near the intersection of the Willamette and Marys Rivers, and at the newer offices on the west side of town on Highway 34.  She was a Library Aide at Thomas Jefferson Junior High (in Eugene), a cashier/clerk in the Business Office at Good Samaritan Hospital (Corvallis), and a Media Specialist at the CIMC (Corvallis School District), once located near Adams School and later at Franklin School, where she taught teachers how to create webpages until she retired.

Mary Anne supported her children during their cross-country, track, and wrestling careers by creating 8mm videos, photos, and scrapbooks during their high school and college days.  She also took her daughter on ski trips.

She moved to Hillsboro, Oregon, in 2004, sharing a back yard gate with the family of her oldest son, to be closer to her granddaughters, and her daughter and son-in-law who lived in Vancouver, Washington, at the time.  She’ll be remembered for the quilts, cross-stitch projects, and scarves she made, all of the family tree data that she gathered, and the love for her dogs for whom she cared so much of her life.

In 2013, after being diagnosed with Alzheimer’s, Mary Anne moved to Appleton, Wisconsin to be closer to her daughter and son-in-law and enjoyed gatherings with friends and family.  Eventually, she moved into the memory care unit at Touchmark on West Prospect in Appleton.

To order memorial trees or send flowers to the family in memory of Mary Anne Brown, please visit our flower store.