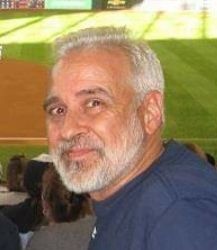 Mark was born in Wyandotte, MI to Donna M. (Burkette) Jones and Lawrence W. Jones on February 7th, 1962.  He went to school in the early days to Wyandotte.  Then his family moved to Bristol, Wisconsin in 1972 where he finished high school and graduated from Central High School in 1980.  Mark played drums (high school) and loved lacrosse in younger days.  He attended UW Whitewater his first year of college, then transferred to UW Stevens Point and graduated with a Bachelor of Science in 1988.   While attending college he met and married Debbie (Stump) Jones in 1986 (while they later divorced in 1998, they remained good friends).  After graduation he took his first job as a Math Teacher in Bakersfield, CA for two years, but decided to move back to the Midwest and taught at Joliet High School, IL for a number of years.  After his daughter, Catherine, was born in 1993, the family moved to the Fox Valley area in Wisconsin.  Mark had various jobs over the years and found his passion as a Math Tutor.  He loved working with the kids and families on a personal level and watching them succeed in their goals.  He also was involved with the Hortonville High School soccer as an announcer for home games.

Mark was also in the Navy Reserves during a time of peace.  He had opportunities to go to Japan during this time and enjoyed the travel and experience of being in the service.  He had a strong respect for service personnel and all they do to keep us safe, both abroad and here at home.

Mark enjoyed road trips that kept him connected to his family in the Racine/Kenosha area and longer trips with his mom to visit their Michigan relatives.  He loved the good food and lively conversations to brag about what a great time he had, whether it was a long trip or just across town with a friend or tutoring family.

Mark is preceded in death by his father, Lawrence Jones.

Funeral services will be held at Wichmann Funeral Home Tri County Chapel, 1592 Oneida Street, Menasha, WI, on Friday, July 2, 2021 at 5:00 PM. Memorial visitation will be held at the funeral home from 3:00 PM until the time of services. Mark will be laid to rest at King Veteran’s Cemetery at a later date.

To order memorial trees or send flowers to the family in memory of Mark L. Jones, please visit our flower store.