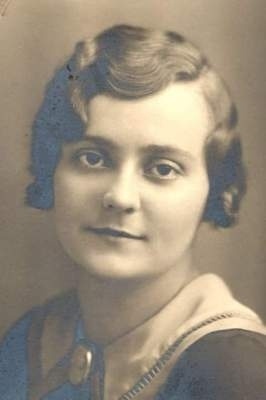 Marion Hagenson, age 102, passed away peacefully, surrounded by her family, at The Heritage Retirement Center, Appleton on Tuesday, May 5, 2015.

The last member of our family's “greatest generation,” she lived in Menasha most of her life but continuously since 1940, moving to The Heritage four years ago. Marion was born in the Town of Neenah on September 20, 1912, the daughter of the late Fred and Clara (Elmer) Zimmerman. On October 10, 1930, she married Millard F. Mellberg at the Evangelical Church in Neenah. When this marriage ended in 1945 Marion raised their five children in a small two bedroom house on Third Street, Menasha. Millard preceded her in death on May 18, 1976. She later married Elmer Hagenson on January 10, 1970 and enjoyed nearly 15 years of companionship and travel until he passed away on May 17, 1984. Marion was a longtime member of First Congregational United Church of Christ in Neenah, attending first at the old Menasha church on Broad Street. She served on various committees and helped at church activities such as visiting shut-ins and driving others to church well into her 90's. She was a charter member of the Skip- A-Stitch Club, which has been in existence since 1937. She loved playing cards and was a past prize winner in the Annual Kimberly Jaycees Sheepshead Tournament. Marion bowled for many years in Neenah and Menasha and was the league secretary for more than 25 years. She was Office Manager for the Menasha Sheet Metal Company for more than 30 years, retiring in the 1980s. Marion loved to work in her yard, garden, crochet, make potato sausage, spare ribs and sauerkraut for annual family reunions and bake her wonderful Christmas cookies called peppernuts. Every year she gave dozens of containers with peppernuts to friends and relatives for Christmas. She was instrumental in establishing and promoting Zimmerman family reunions for many years. She was adventurous, driving to New York City with her sisters when she was nearly 60. She also drove to St. Louis on many occasions for her grandchildren's and great-grandchildren's events. Marion, Elmer and her sister, Lyla toured Europe in 1977. In 2009 at age 97, she accompanied many of her family on a cruise in the Caribbean. Marion was 101 years old when she took a trip with her nephew visiting Gulf Shores, Alabama where she won more than $100 at a casino. In recent years she has enjoyed Sheepshead games at least twice weekly and has competed with her children and grandchildren at dominoes.

A Funeral Service will be held at 11:00 am on Saturday, May 9, 2015, at Congregation United Church of Christ, 1511 Nicolet Blvd. in Neenah with Rev. Greg Smith officiating. Visitation will be held on Friday evening, May 8, from 4:00 pm until 8:00 pm at Wichmann Funeral Home-Laemmrich Chapel, 312 Milwaukee Street in Menasha. Visitation will again be on Saturday morning from 9:30 am until the hour of the service at the church. Interment will take place in Resthaven Cemetery in the Town of Menasha. Memorials will be given to Congregational United Church of Christ in Memory of Marion.

The family would like to extend a special thank you to the wonderful staff at Heritage Retirement Center for their friendship and kindness in caring for Marion during her residency.

To order memorial trees or send flowers to the family in memory of Marion Hagenson, please visit our flower store.