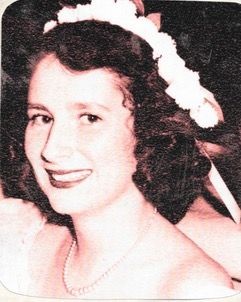 Ann Davis, who was born and raised in the southwestern Wisconsin city of Monroe, passed away at Touchmark senior care in Appleton on Sunday, September 9, 2018, at the age of 88. Ann was born February 24, 1930 to the late John and Mae Share, and was the youngest of four children - Ann, Jack, Bob, and Holly. By the time Ann was starting high school, all her siblings were out of the house, leaving Ann the baby, as the only child.

Ann married Roy Eugene Davis in August of 1953. “Gene”, as he preferred, was also born and raised in Monroe. Ann and Gene first met at a grade school birthday party for Gene’s sister Joanne. It wasn’t until high school that Ann and Gene started dating. Ann was a sophomore and Gene was a junior, and ever since then, Gene had been the love of her life. Gene preceded her in death in 2006.

Ann graduated from Mount Mary College in Milwaukee with a teaching degree. She married Gene after he returned from the Marine Corps at the end of the Korean War. They moved to LaCrosse where Gene finished college at the university there. After his graduation, they moved to Columbus, Ohio, so Gene could earn a master’s degree from Ohio State. Their first son, John, was born during this time.

Ann and Gene moved from Ohio to Platteville, Wisconsin, where Gene started teaching and coaching at nearby Cuba City High School. Their second child, Jane, was born about that time. Gene moved Ann and the kids to Appleton to begin his lengthy thirty-five year coaching career at Lawrence University. The couple had three more sons, Jim, Joe, and Jerry.

Ann is survived by her five loving children and their families:

Jane Davis and her children: Jennifer (Rocco) Elrod with Addison; and Kyle Davis.

Jim (Kathy) Davis and their sons: Jake (Meghan) Davis with Jace; and Jon (Laura) Davis with twins Jett and Minka.

Joe (Marta) Davis and their children: Rachel (David) Head with Dominic and Camryn; and Scott (Melissa) Budweiser with Kaizyn.

Jerry (Amy) Davis and their children Parker Davis, Taylor Davis, Jordan Langer, and Grant Langer.
Ann was preceded in death by her parents, her husband Gene, and a great-granddaughter Harper.

Ann was a devoted and loving wife and mother. If Gene was the family foundation, Ann, with her strong Catholic faith, was most certainly the cement that held it together. Ann would have made a fine teacher, though she will always be remembered as the wonderful mom that she was.

The family would like to thank ThedaCare Hospice and case Manager Heidi for the exceptional guidance and support through those final weeks of mom’s life. And to the wonderful staff at the Monarch neighborhood of Touchmark, we thank you. You truly were mom’s extended family. The care and assistance you provided was amazing. You all are angels and “Ms. Ann” loved you.

A Memorial service will be held at 11:00 AM on Thursday, October 4, 2018 at St. Bernard Catholic Church, 1617 W. Pine Street in Appleton, with Fr. Amal Roche officiating. Family and friends are welcome to gather at the church on Thursday, from 9:00 AM until 10:45 AM.

The family requests any donations be made to The Coach Gene and Ann Davis Memorial Scholarship Fund, through the Community Foundation For The Fox Valley Region, 4455 W. Lawrence St., Appleton, WI, 54914.

To order memorial trees or send flowers to the family in memory of Margaret "Ann" Davis, please visit our flower store.