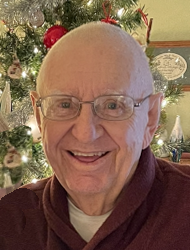 Ken was born on March 1, 1934 to Clyde and Cecelia (Phillips) Schwerbel in Appleton, WI. After Ken graduated from Appleton West High School  in 1952, he went on to serve his country by joining the Navy. Ken served 8 years in the Naval Reserve with 2 years active duty on board the Destroyer USS Saufley DD 465. He was a radarman 3rd class with a home port of Key West, Florida and was honorably discharged in February, 1959. After proudly serving his country, he went on to work as a general ledger accountant for 42 years starting at Marathon, then American Can Company and eventually retiring in 1996 from Alcan.

In August of 1961, Ken married Irene (Spath) at Immanuel Lutheran Church in the Township of Springfield, WI . Ken and Irene went on to have 3 daughters and resided in Menasha, WI for the past 60 years.

After Ken retired, he and his wife traveled to Chandler, Arizona for many years. There they watched the Brewers and Chicago Cubs play during spring training. Ken enjoyed watching sports. He was a die hard Cubs fan. It was always his goal to see the Cubbies win the World Series which he accomplished in 2016. He was also a season ticket holder for the Green Bay Packers. One of the highlights of  Ken’s life was attending the “Ice Bowl” at Lambeau Field in 1967 where he saw the Packers win the championship.  Ken was an avid reader and loved to watch Jeopardy each day. He will always be remembered for his love of kitty cats, Mexican food, a good cup of black coffee along with a chocolate persian donut.

But it was in his 50’s  he began to read his Bible and do daily devotions. During this time Ken grew to love the Old Testament and it amazed him how God’s plan for salvation was clearly woven throughout the old and new testament. Ken even surprised himself how his love for the scriptures grew and his early morning readings became a highlight of his day. Even in his last months when his health was failing him he was amazed how his daily devotional readings applied to his life and the struggles he was having. He trusted his Lord and Savior to the very end and felt incredibly blessed to have experienced God’s faithfulness for nearly 88 years.

Ken was preceded in death by his parents Clyde and Cecelia Schwerbel. He is survived by his wife of 60 years Irene, Julie (Mark) Jensen and their 3 children-Kayla Jensen (Mike McCulloch) of Neenah, Ashley Leitner (Anthony) of Valders and Jake Jensen of Kenosha, WI.   Amy (Jeff) Seibold of Oshkosh and their 4 children Emma, Sam, Ben and Jack Seibold all of Oshkosh, WI. and Carrie (Kurt) Olson of Almond, WI and Zach (Bianca) Olson of Wausau, Tanner Olson of Stevens Point, Caleb Olson of St. Petersburg, FL and Isaac (Autumn) Olson of Waupaca, Nate Olson of Stevens Point,  WI. Ken was blessed with 12 grandkids total and 6 great-grandkids (Jayce, Alara, and Reyna Olson; Max McCulloch & Everly Leitner). He is also survived by 2 cousins Cheryl Roche, Jacque (Bill) Munger both of Appleton.

A private service for immediate family will be held February 18 at Trinity Lutheran Church, Menasha, WI . In lieu of flowers, a memorial will be established.

To order memorial trees or send flowers to the family in memory of Lowell Kent "Ken" Schwerbel, please visit our flower store.