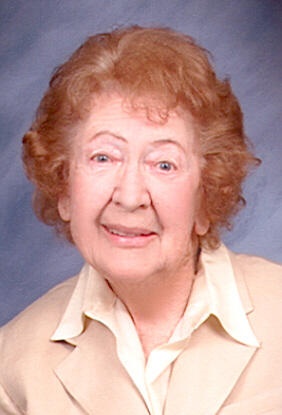 Lois Jean Rusch, 93 of Appleton, died Monday February 14, 2011 at Appleton Medical Center. Lois was born January 22, 1918 in Janesville, WI a daughter of Thomas and Almyra (Bentley) Gregg. Lois married Robert F. Rusch in August 1950, they were married 53 years before his death in July 2003. She graduated from Horlick High School in Racine, WI, graduated with a Bachelor of Science degree from the University of Wisconsin-Stout, and received a Masters of Science Degree from Columbia University, New York, NY. She taught Home Economics at Rhinelander Vocational School, and was a Coordinator for 47 years at Fox Valley Technical College, retiring in 1985; she was employed several years for Department of Interior Isle Royale National Park, Houghton, MI.

Lois was a member of First United Methodist Church, Appleton, Fidelity #94 Order of the Eastern Star, past President of Women in Management, Fox Cities, member of Delta Kappa Gamma, Omicron Chap, past state President of the Homemaker's Club, and a long time member of American Association of Family and Consumer Sciences. She volunteered for many years at the Outagamie Red Cross.

Lois was one of the first women to earn her private pilots license in the area. She and Robert enjoyed many years flying throughout the United States, as well as Egypt, Greece, and several Mediterranean countries.

Lois is survived by a special cousin, Winnifred Crosley of Eldora, IA, Nephew Brian (Vickie) Rusch of Appleton, Niece Elizabeth (Steve) Mendleski of AR; several nieces, nephews, cousins and many dear friends. She was preceded in death by her parents, husband, Robert and a brother, Gerald.

The funeral service for Lois will be held on Friday, February 18, 2011 at 11:00 A.M. at FIRST UNITED METHODIST CHURCH, 325 E. Franklin Street, Appleton, with Rev. Krystal Bartelett officiating. Visitation will be at the church on Friday from 10:00 A.M. until the hour of service. Burial will be at Highland Memorial Park.

To order memorial trees or send flowers to the family in memory of Lois Jean Rusch, please visit our flower store.