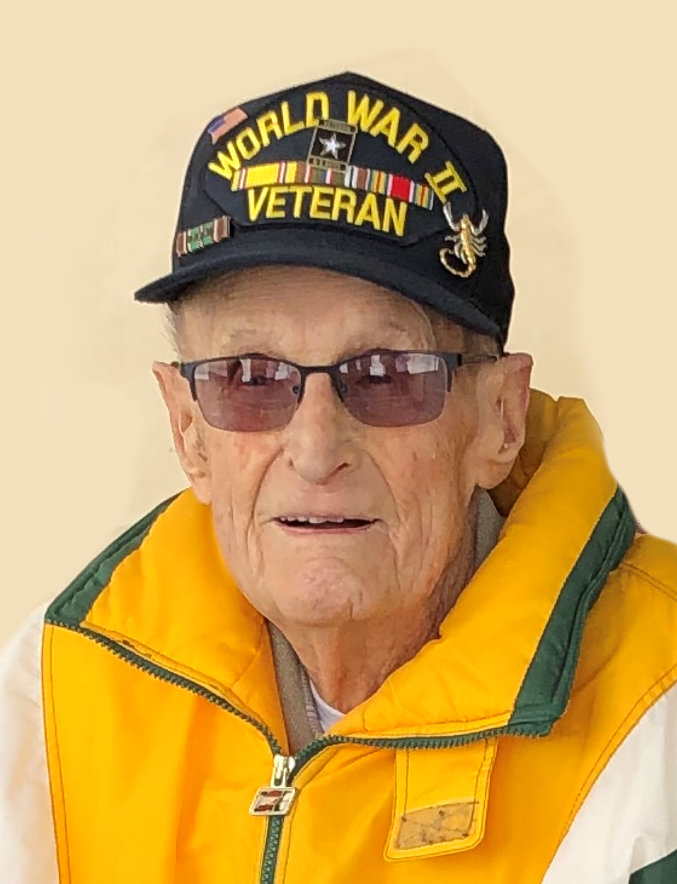 After being granted one hundred years of time on this earth, our Lord called Lloyd to his heavenly home on June 9, 2021. Lloyd was born in New London on February 16, 1921, son of the late J. Edward and Myrtle (Law) Ellefson.

From 1942 until 1945, Lloyd served in the United States Army during World War II, reaching the rank of TEC 5. On October 11, 1947 he married Eva Presteen and together they raised a family of three daughters. Eva preceded him in death in 2005.

In his younger years, Lloyd held many jobs including a milkman, a delivery truck driver for a meat market, co-owner of Appleton Camera Supply, but most will remember him as being a Mill Planner and Customer Service Coordinator at Kimberly Clark Corporation, where he retired after thirty-six years of service.

Lloyd definitely had wonderful artistic talents which included woodworking, painting, and drawing. He enjoyed bowling and watching the Packers. He was very proud of his military service and of reaching his 100th birthday.

Lloyd was preceded in death by his parents, his wife Eva, a son Randall, sisters: Dorothy Papenfus, Lucille Kahler and Bernice Gitter; and brothers: Norman, Elvin, and Edwin Ellefson.

The funeral service for Lloyd will be held at 11:00 AM on Wednesday, June 16, 2021 at Faith Lutheran Church, 601 E. Glendale Avenue in Appleton, with Rev. Aaron Rosenau officiating. Entombment will take place at Highland Memorial Park. Visitation will be from 4:00 PM until 7:00 PM on Tuesday at the Wichmann Funeral Home, located at 537 N. Superior Street and again at the church on Wednesday from 10:00 AM until the time of the service. Full military honors will take place following the service. The service will be streamed by visiting www.faithfoxvalley.org and click on “Stream from Faith Ministry Center”.

Heartfelt appreciation to Terry Peil and Sheila Hein (who were like a son and daughter to him) for all of their loving tender care and companionship. The family would also like thank Vets & Friends for their friendship, support, and the best 100th birthday parade ever!

To order memorial trees or send flowers to the family in memory of Lloyd D. Ellefson, please visit our flower store.