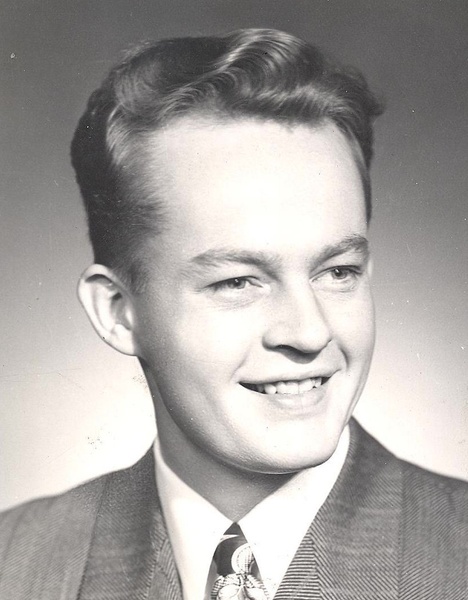 Len was born July 24, 1927, in West Allis, Wisconsin to the late Carl H. Lindgren and Estrid (Dikander) Lindgren. Len enlisted in the U.S. Naval Reserves before graduating from Nathan Hale High School in West Allis, and served on active duty in 1945 and 1946. After that, he remained in the Naval Reserves for eight years. He attended Marquette University on the GI Bill and graduated from the College of Journalism in 1950. At Marquette he was active as co-editor of the university yearbook, fraternity president, news writer, and sports bureau photographer. He married his high school sweetheart, Dorothy Coad later that year, and they celebrated their 63rd wedding anniversary last October.

Len's business career with Allis-Chalmers, Abbott Labs, Skil Corporation and Miller Electric took him and his family to various Midwest locations. He retired from Miller Electric as Vice President of Employee Relations in 1993. Len had a longstanding commitment to helping others and community service. He particularly enjoyed his recent activities as a director and past officer of the Thompson Community Center, past chairman and member of the Advisory Board of the Appleton Family Health Center, UW Medical School Regional Residency, and a founding member of the Valley Kids Foundation. He was a member and elder of the Memorial Presbyterian Church in Appleton, a Kiwanis Golden K, F & AM Waverly Lodge of Appleton, and the Fox Valley Golf Club. Len had a great sense of humor all his life and a variety of interests, ranging from the Green Bay Packers to stock market reports. He enjoyed wood working and furniture refinishing, gardening, golf, bridge, reading, big band music, and traveling. He was especially proud of his Swedish heritage.

He is survived by his wife: Dorothy C. Lindgren: his children: Richard Coad Lindgren of Oakland, California; Karen (Bob) Schrum of Crown Point, Indiana; and Kris (Mick) Rembold of Chesterfield, Missouri; his grandchildren: Robby (Breen), Andy, Jonathan, Zoe, Katie, and Michael. He is also survived by his sister-in-law: Doris Simonson, and cousins, nieces, and nephews.

In keeping with Len's request, his body will be cremated.

A memorial service will be held at 3:00 PM on Tuesday, May 20, 2014 at MEMORIAL PRESBYTRIAN CHURCH, 803 E. College Avenue in Appleton, with Rev. Michael Goodwin officiating. Family and friends are invited to gather directly at the church on Tuesday afternoon from 1:00 PM until the time of the Masonic Service which will be held Tuesday at 2:45 PM at the church.

In lieu of flowers, memorials may be directed to the Memorial Presbyterian Church in Appleton, Valley Kids Foundation, Thompson Community Center, and Leaven. Online condolences may be offered at www.wichmannfargo.com.

Above all, Len loved his family and that love was returned manifold. He was an exemplary father and husband, and he will be sorely missed by his family and friends.

To order memorial trees or send flowers to the family in memory of Leonard C. Lindgren, please visit our flower store.