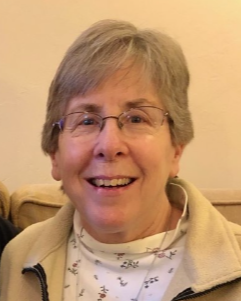 On October 19, 2022 Laurie Mae Pankow (DeCleene), a wonderful wife and amazing mother of three, passed away at 68 years old.  She died from complications due to Alzheimer’s while at St. Paul’s Elder Home in Kaukauna, WI.

Laurie received a degree in dietetics from UW Madison and there met her husband, Dean Pankow.  They were married on August 8, 1981.  After having two children in the United States, Laurie and Dean made their home in Cameroon, Africa and while there, had their third child.  They served as missionaries in Cameroon from 1988-2007.  During this time, Laurie blossomed as a homeschooling teacher to her children and later as a dorm parent at an international boarding school.  When she returned to the United States, Laurie worked as a customer service representative at Navitus.

She enjoyed spending her time with her children and grandchildren (traveling far and wide, especially at the birth of a new grandchild!) as well as with her siblings and parents.  Throughout her life, Laurie loved her family well, was intentional in her friendships, enjoyed studying God’s Word, served in her church community, and encouraged those around her by joyfully practicing her gift of hospitality (coffee was always brewing at the Pankow house!)

Laurie is survived by her husband, Dean Pankow, and her children, Ben Pankow (Kirsten), Andrew Pankow (Amy), and Linda Stollfus (Zach).  She is also survived by her eleven grandchildren: Brielle, Caleb, Josiah, Daniel, Joseph, Anika, Leah, Samuel, Jethro, Luther, and Irene (with another granddaughter due in December).

A memorial wake will be held from 4-7 PM at Wichmann Funeral Home, 537 N. Superior St, Appleton on November 4, 2022.  A memorial visitation will be held from 9-10 AM at Appleton Evangelical Free Church, 2490 W. Capitol Dr, Appleton on November 5, 2022 with a memorial service to follow at 10 AM.  Laurie will be laid to rest at Mount Olivet Cemetery in De Pere.  In lieu of flowers, please consider making a donation to the Alzheimer’s Association in honor of Laurie.