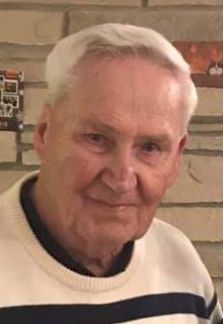 Larry R. Laus, age 85, passed away peacefully with his family at his side on Saturday, February 26, 2022, at Rennes Rehabilitation Center. He was born on August 3, 1936, in Menasha, Wisconsin, son of the late Edward and Lazetta (Asmus) Laus. On April 27, 1957, Larry married his high school sweetheart, Darleen Miller and subsequently raised 4 wonderful children.

Larry worked at Banta Corporation for over 50 years as a pressman and supervisor and later acted as a consultant after retiring.  Throughout his career, he was given the opportunity to travel to Germany and Japan to participate in equipment purchasing decisions.  Larry was an avid Wisconsin Badger fan all his life and he and Darleen were Badger football season ticket holders for many years.  After retirement, Larry and Darleen spent their winters in Florida enjoying the weather and golfing every chance they got.

Larry enjoyed watching college sports, playing cards, and reading just about anything, especially anything pertaining to history.  He especially enjoyed spending time with his grandchildren.  His face would light up when little ones were around.  Larry's love for driving on roads he'd never been on, and all things history led him to take his family on many driving vacations across the United States and Canada.  He'd load the family up in the station wagon and then make everyone get out at every historical marker on the side of the road so he could read them to the family.

He is preceded in death by his father and mother, Edward and Lazetta Laus, mother-in-law Jeanette (Gorges) Miller, father in law Larry Miller, step mother in law Elizabeth Miller and sister in law Chris Laus.

The family is grateful for the compassionate care provided by the Rennes staff and the hospice nurses in Larry's last days.  A celebration of Larry's life will be held on Friday, March 18th from 4:00 PM to 6:00 PM at Wichmann Funeral Home Tri County Chapel, 1592 Oneida St, Menasha, WI.

To order memorial trees or send flowers to the family in memory of Larry Richard Laus, please visit our flower store.