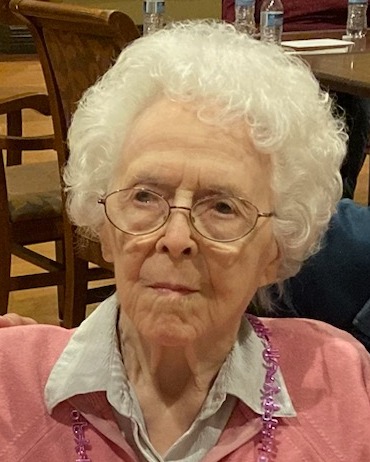 La Verne Hameister Moder passed away Friday, January 6th, 2023, at Rennes, at the age of 100.  She was born November 3rd, 1922, to Marie Cecelia (Peterson) and Harry Hameister in Langlade County. La Verne was one of nine children growing up in Anitgo, Wisconsin where her family operated a farm.  After high school she went on to the technical college where she excelled in secretarial skills. Then she spent time traveling with her sister Bette and living in Chicago, Texas, New York.  During World War II she joined the War Effort as a civilian secretary stationed in Japan. La Verne worked as secretary for the Marathon Corp and later she made her career as secretary for 4 presidents of Lawrence University.

La Verne married Robert "Bob" Moder August 29th, 1969. They enjoyed 29 years together before Bob passed away on February 3rd, 1998. Upon retiring La Verne ventured out volunteering for Appleton Medical Center and St. Elizabeth's Hospital into her 80's.  She always enjoyed spending time with her family, friends, and prayer group. La Verne was a very loving, caring, gentle person who will be missed by everyone who knew her, especially family.

Visitation will be held at First United Methodist Church (In the side chapel), 325 E. Franklin St., Appleton WI on January 14, 2023 from 10AM until time of service, and a service at 11AM.

Special thank you to the staff at Rennes, Promedica-Hospice, and especially Amy for her love and compassion.

To order memorial trees or send flowers to the family in memory of La Verne E. Moder, please visit our flower store.