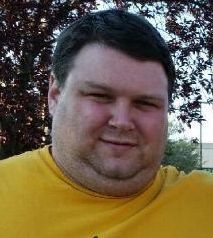 Kevin Paul Burger, age 36, passed away unexpectedly at his home on Monday, February 16, 2015. He was born in Madison, Wisconsin on September 3, 1978 to Harry and Marjorie Burger. Kevin was raised in Menasha, and graduated from Menasha High School in 1996. He was a loyal employee of Modern Business Machines for over eight years. Kevin loved watching all sports and was an avid Chicago Bears fan. He also enjoyed playing softball and golf with his friends. Most importantly, Kevin was a loving father to his daughter, Emily. Emily was everything to him, and he was so incredibly proud of her.

He was preceded in death by his paternal grandfather, Harry Burger Sr.

A Memorial Service for Kevin will be held at 6:00 PM on Saturday, February 21 at the WICHMANN FUNERAL HOME-LAEMMRICH CHAPEL (312 Milwaukee St., Menasha). Visitation will be held from 4:00 PM until the time of service. In lieu of flowers, a memorial fund is being established in his name.

Thank you to all of our friends who feel just like family.

To order memorial trees or send flowers to the family in memory of Kevin P. Burger, please visit our flower store.