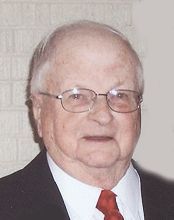 Ken Lorenz, age 83, passed away on Tuesday evening, May 20, 2014 at the Appleton Medical Center. Ken was born in Wabeno, Wisconsin on September 22, 1930, son of the late Paul and Emma (Pagenkopf) Lorenz. He attended high school in Wabeno and graduated in the class of 1949. He immediately entered the United States Army, and it was there he met his future wife, Laurice Salisbury. The couple married in Okinawa on June 10, 1952, and Ken's service continued until 1953. Laurice preceded Ken in death in 2009.

Ken was employed by WE Energies for thirty-five years, retiring on June 1, 1988. The couple moved to Crivitz where they resided for fourteen years and Ken was a member of the Athelstane / Silver Cliff American Legion, Grace Lutheran Church, and the Twin Bridge Rescue Squad. In 1992, they moved to Little Chute. Ken had been a longtime and faithful member of Trinity Ev. Lutheran Church in Kaukauna.

The Christian Funeral for Ken will be held at 11:00 AM on Saturday, May 24, 2014 at TRINITY EV. LUTHERAN CHURCH, 804 Grignon Street in Kaukauna, with Rev. Timothy Wilkens officiating. Full military honors will follow the service. Family and friends are invited to gather at the church on Saturday morning from 9:30 AM until the time of service. Burial will take place privately, in the church cemetery. Online condolences may be offered at www.wichmannfargo.com.

To order memorial trees or send flowers to the family in memory of Kennith M. Lorenz, please visit our flower store.