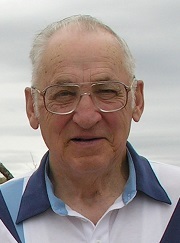 For many years Ken longed to join his wife, and on November 16, 2014, his wish was granted. Born in Mellen, WI, on May 9, 1931, to Alton and Grace Wood. He married Donna Bishop on June 5, 1954, and they were married for 51 years before Donna's passing on February 2, 2006. They made their home in Combined Locks and were members of the Kimberly Presbyterian Church.

Following graduation from Mellen High School, Ken relocated to Neenah and began his career at Neenah Paper, working there until retirement in 1988. He proudly served in the Marine Corp, stationed in Korea where he was a cook. He was a lifetime member of VFW Post 10544.

Ken was an avid sports enthusiast, missing few Brewers, Badger, or Packer game broadcasts, in addition to college and high school basketball. He enjoyed deer hunting, fishing, cribbage, horseshoes, smoking his pipe, plus all the dogs in his life, not only those he owned but also his daughters'.

In 1993, he built his beloved cabin on Hanninen Hill in the Town of Marengo. He loved spending time at the cabin, cutting firewood, tending the fire, and visiting with the other residents of the hill. Fall was his favorite time of year and while he was still able to be there on his own, he would spend most of September and October at his piece of heaven on earth.

He enjoyed travel; when their girls were growing up, he and Donna took many multi-state tent-camping trips and summer trips to the Witter farm in Rochester, MN. Following retirement, he and Donna travelled throughout the U.S., with many trips planned around participation in World Horseshoe Tournaments.

He is survived, and will be missed by his daughters, Kathy Keshemberg, and Christine (Randy) Geurden, and Dawn Wood; his grandchildren, Kory Keshemberg, Carissa (Jonathan) Buchanan, and Lucas Geurden; his great-grandchildren, Kara, Paxton, and Kale Keshemberg; a sister, Joyce (Jack) Vitek-Timm; a brother-in-law, Robert (Jean) Bishop; and many nieces, nephews, and cousins.

A service will be held at 1:00 p.m. on Friday, November 21, at the Jansen Fargo Funeral Home, 204 E. Kimberly Avenue, Kimberly. Family and friends are invited to visit from 11:00 a.m. until the time of the service. The burial for Ken will take place at Highland Memorial Park, 3131 N Richmond Street, Appleton, at 10:00 on Saturday, November 22, with full military honors.

The family expresses gratitude to the staffs of Emeritus at Fox River and Heartland Hospice Service for their compassionate care.

To order memorial trees or send flowers to the family in memory of Kenneth Clyde Wood, please visit our flower store.