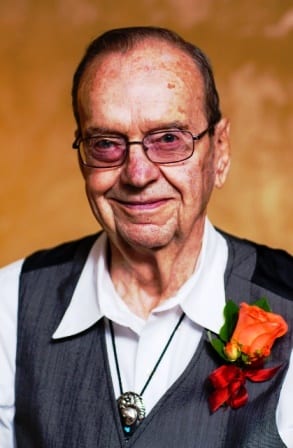 Kenneth Allwardt, age 90, passed away on Tuesday, November 3, 2020 after a long battle with dementia and other chronic medical conditions, complicated by a short battle with COVID-19.

Ken was born April 15, 1930 to the late Ernest and Myrtle (Miller) Allwardt. He married Wilma Wiegand November 11, 1950. Ken was employed at International Paper, formerly Thilmany Pulp and Paper for 35 years until his retirement on February 1, 1989. He was a member of Bethany Lutheran Church, Kaukauna, WI.

Ken was very good at designing and building things. He built the house and garage on Grant Street in Kaukauna where he and Wilma raised their family, the camper trailer which the family used for many years and the family cabin located 10 miles west of Mountain, WI.

For many years after early retirement, Ken enjoyed driving up to the family cabin where he collected lots of wood, cut it up and created wood piles. He then used the wood for campfires, cooking, and heating the cabin. Ken also made sure that his two youngest daughters had plenty of outdoor fun at the cabin with minibike riding, snowmobiling, small game hunting, fishing, wild blackberry picking, and rafting down the wolf river.

When Ken’s health started failing, he moved to an assisted living facility in Appleton and eventually into a nursing home. He was one tough dude having survived multiple major surgeries, and just bounced right back – like a cat with 9 lives.

Due to the current circumstances, a private funeral will be held for Ken at 1 PM on Tuesday, November 10, 2020 by Rev. Rod Krueger of Bethany Lutheran Church, Kaukauna.  You may view the service via Livestream by visiting wichmannfuneralhomes.com on the day of the service.

In lieu of flowers, his family asks that you make a donation to a local food pantry or warming shelter in memory of Ken.

To leave a special memory or condolences with Ken’s family, please visit wichmannfuneralhomes.com

To order memorial trees or send flowers to the family in memory of Kenneth Allwardt, please visit our flower store.