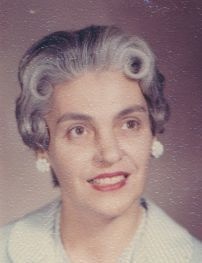 Kate Wilson, age 88 of Appleton, passed away at Brewster Village in Appleton. Kate was born in Chicago on March 1, 1928, daughter of John and Caroline (Pier) Roemer. She was a graduate of East High School in Denver, and earned her degree in elementary education from the University of Whitewater. Kate was a lifetime member of the Theta Sigma Upsilon sorority. Throughout her life her teaching took her to various locales. They included Lake Geneva, East Moline, Illinois, Normal, Illinois, New Lenox, Illinois, and finally to Weyauwega Elementary School. She dedicated herself to her career. Kate also enjoyed tennis in her younger years, and later began to attend auctions and travel with Norm in their retirement years. She also volunteered her time as a tutor to those young folks who needed assistance.

Funeral services for Kate will be held at 11:00 AM on Saturday, September 10, 2016 at Wichmann Funeral Home, 537 N. Superior Street in Appleton, with Rev. Rick Schroeder officiating. Interment will take place at a later date at St. Mary Cemetery. Relatives and friends are invited to gather at the funeral home on Saturday morning from 9:00 AM until the time of the service.

To order memorial trees or send flowers to the family in memory of Kate Roemer Wilson, please visit our flower store.