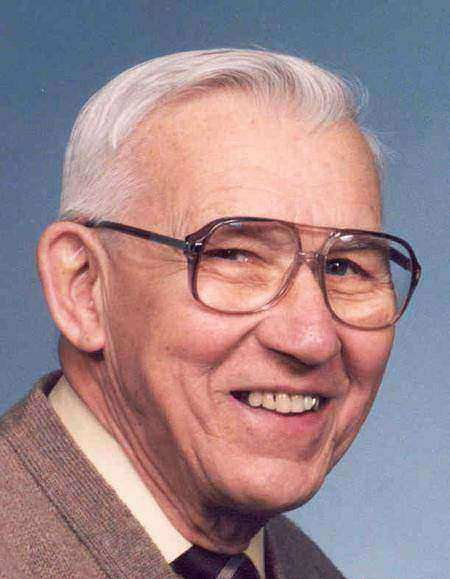 Karl D. Meinke
Of Appleton, formerly of Madison
Age 89, passed away on Sunday, May 25, 2003 at Peabody Manor. He was born in Madison to the late John and Anna (Dindas) Meinke on October 15, 1913. Karl graduated from West High School in Madison and also attended the University of Wisconsin-Madison for two years. He married Grace Schultz on April 14, 1937 in Madison, and enjoyed 66 years together. He was in the U.S. Naval Reserves. Karl worked as an appliance repairman for 35 years with Madison Gas and Electric Company until his retirement in 1978. Karl was a member of Grace Lutheran Church, Appleton.

Karl was preceded in death by his parents; two sisters; one brother; and a granddaughter, Michelle Horstman

Funeral Services will be held on Tuesday, May 27, 2003 at 7:00 PM at the funeral home with Pastor Danny Wright officiating. Visitation will begin at 4:00 PM until the time of services. Interment will take place at Roselawn Cemetery in Madison. A memorial fund is being established.
The family would like to thank the entire staff at Peabody Manor for their compassion, care, and love shown to Karl and his wife the last year.

To order memorial trees or send flowers to the family in memory of Karl Dindas Meinke, please visit our flower store.