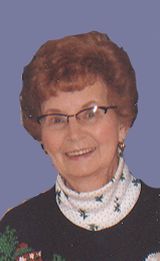 Julienne Rusch, age 85, passed away peacefully Thursday, March 3, 2016, at American Grand Assisted Living in Kaukauna. Julienne was born on Halloween, October 31, 1930 to the late Peter and Susan (Van Laanen) Verbeten. She graduated from Kimberly High School in 1949. Julienne worked several years at Eiting's Supermarket and then as a loan officer for over twenty years at Kimberly Credit Union/Capital Credit Union. After retirement she worked several years at Piggly Wiggly. Julienne enjoyed golf, her card club and just about anything that could be done outdoors. She was an excellent cook and made the best chocolate cake and carrot cake! While living at American Grand she also became the Queen of Bingo! Her true pride and joy was her family, especially her grandchildren and great-grandchildren.
Survivors include her four sons, Rick (Sue) Rusch of Darboy, Jim (Barby) Rusch of Oregon, Wisconsin and their son Ethan, Mick (Kim) Rusch of Appleton and their children, Andy and Jack, Tim (Becky) Rusch of Little Chute and their children, Nicole (Joel) Bruch and Patrick (Allie) Rusch; her great-grandchildren, Jaxson and Maddox Rusch, Hazel Bruch and another Baby Bruch on the way. She is further survived by one sister, Gretchen Hornung Price; a brother, Richard (Janet) Verbeten as well as numerous other nieces, nephews, other relatives and friends.
Julienne was preceded in death by her parents; her sister, Rosanne Van Ryzin; her brother and sister-in-law, Francis (L. Marie) Verbeten; brother-in-law, Bob Hornung; her former husband, Maynard Rusch and his sisters, Laverne (Dick) Boehm and Pearl Belisle.
The funeral Liturgy for Julienne will be held on Friday, March 11, 2016 at 12:00 p.m. at HOLY SPIRIT PARISH, 600 East Kimberly Avenue, Kimberly. Friends may call at the church on Friday starting at 10:00 a.m. until the time of the service at 12:00 p.m. with Rev. Robert Kollath officiating. In lieu of flowers, a memorial fund has been established in Julienne's name. Online condolences can be expressed at www.wichmanfargo.com.
The family would like to express their sincere thanks to the staff at American Grand for their care, compassion and kindness.

To order memorial trees or send flowers to the family in memory of Julienne H. Rusch, please visit our flower store.