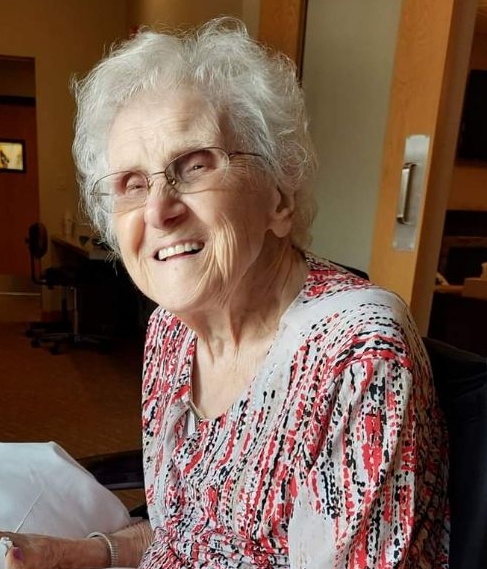 Josephine Johanna Daczyk (Jankowski) died peacefully the evening of May 22, 2022, surrounded by her family.  Jo was the fifth of seven children born to parents Adolph and Bernice (Ostrowski) Jankowski who immigrated to Chicago IL via Ellis Island.  Jo was born in Chicago IL and spent the majority of her youth there. After a family move to Stevens Point to start a family farm, Jo met Peter Daczyk and the two married soon after their meeting.  Following their marriage, baby Don arrived and soon after, Peter and Jo moved to Menasha where they added to their lively brood with the additions of Alice, Ann, Myron and Tim.

Jo was a spitfire of a woman with a wonderful work ethic.  She was a keen gardener -which allowed provision of good food for her family; and loved to volunteer at Theda Clark for 25 years.

Following the passing of Peter, Jo remained at the family home in Menasha until the age of 89!  She was known to watch over her neighbors as much as her family watched out for her.

Jo enjoyed bingo, gardening, trips to the casino and spending time with her family, especially her grandchildren and great grandchildren.

Jo is preceded in death by her parents and husband as well as son Don.  Grandchildren and great great grandchildren who met Jo at the gates of Heaven are: Jim, Shelley, Marlowe. Five of Jo’s siblings also preceded her in passing: Ann, Tony, Adolph, Stanley, Bernice.

A funeral mass for Jo will be held at St John the Baptist Catholic Church, 516 DePere Street, Menasha on Tuesday May 31, at 11:00am. Friends and family may gather at the church from 9:00am until the start of mass. Josephine will be buried next to her husband Peter at St John’s Catholic cemetery in Menasha.

In lieu of flowers please consider a donation to Fox Valley Memory Project in Josephine’s name or consider planting a tree in her memory.

Jo’s family would like to extend a special note of thanks to the staff at Oak Ridge Gardens for their exceptional care and compassion extended both to Jo and the family.