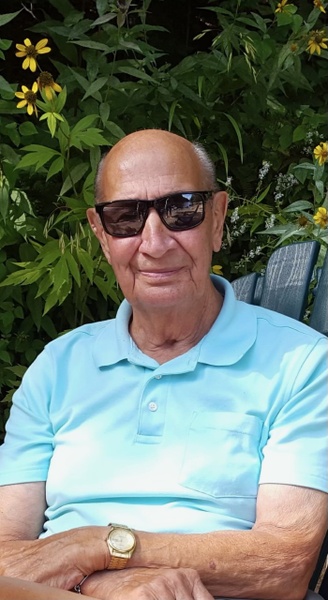 Joseph Francis Schmidt, age 93, went home to rest with his Savior and Lord Jesus on January 22, 2022.  Joe was born in Lakota, North Dakota, on April 13, 1928, son of Edward and Elizabeth (Hinks) Schmidt.  He attended Appleton High School, later proudly enlisted in the United States Navy. Joe met his future wife, Dolores Hollenback, after her brother, Curley, introduced them.  Joe and Dolores married on August 29, 1953, at St. Joseph Parish in Appleton.  They shared 62 years of marriage until her passing in 2015.  Joe worked as a machine operator/foreman for Kimberly-Clark, retiring after 38 years.

Joe enjoyed traveling with his wife, Dolores, extensively throughout the United States. Building puzzles, playing cards and games were a few of his favorite pastimes.  He also enjoyed spending time up north; fishing, swimming/floating and poking at campfires.  Joe’s life was driven by his strong faith in God and love for his family.  People were important to him but most of all, he cherished his family and friends.

A private family service was held for Joe on January 25, 2022, with another gathering to take place in the spring at the cemetery,

The Schmidt family would like to thank the staff at the Calumet County Medical Center in Chilton, for the extraordinary care of their father. A special thanks to Dr. Dellaria and nurse Kayla for their support through this difficult time.  They would also like to thank Joe’s thoughtful neighbors for all their caring support.

Donations can be made directly to the family for a future donation to the Calumet Area Community Health Foundation-hospice suite.

To order memorial trees or send flowers to the family in memory of Joseph "Joe" Schmidt, please visit our flower store.