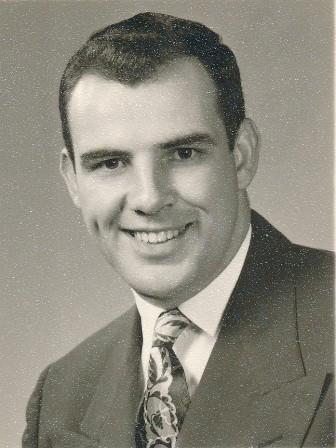 John Avon Madden of Appleton, Wisconsin and Naples, Florida, passed away on October 5, 2013, at the age of 86. He was born on August 11, 1927 in Fargo, North Dakota, the son of Margaret (Price) and Avon Thom. He served in the Unites States Marine Corps in 1944 and the United States Navy in 1945, and was a 1947 graduate of Madison, Wisconsin Central High School. He attended the University of Wisconsin – Madison and graduated from University of Wisconsin – La Crosse in 1952 with a B.S. in Education. In 1953 he graduated from Hermann Hospital School of Physical Therapy at the Houston Medical Center. On January 1, 1955, he married the love of his life, Doris Mae Schlimgen, in Madison, Wisconsin.

John was a member of St. Bernard's Parish in Appleton and St. Ann's in Naples, Florida, and was also an active member of the American Physical Therapy Association and its Wisconsin chapter, and the National and Wisconsin Private Practice Associations. He was a long time member of Butte des Morts Country Club in Appleton, Foxfire Country Club in Naples, Elks Lodge (B.P.O.E) and the 1951 UW-La Crosse Cigar Bowl Champions team.

John's greatest love was his family. His passion was helping and healing others through his profession. He was an avid golfer and enjoyed basketball, handball, traveling and following the victorious Badgers and Packers.

A memorial service for John will be held at 12:00 Noon on Friday, October 18, 2013 at St. Bernard Catholic Church, 1617 W. Pine Street in Appleton. Family and friends will gather at the church on Friday morning from 10:30 AM until the time of the mass. A private interment will be held at a later date. In lieu of flowers, memorials will be given to several local organizations John believed in.

Special thanks to all the wonderful friends that brought so much joy to John's life and the incredible care & compassion provided to him and his family by the staff at Appleton Health Care Center.

To order memorial trees or send flowers to the family in memory of John A. Madden, please visit our flower store.

Heart of the Valley Crematory