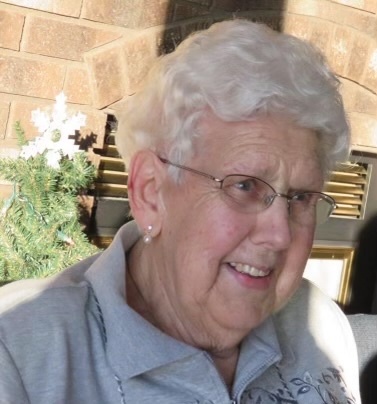 Joan Beth Van Handel, age 90, passed away peacefully at her home on June 28, 2022 surrounded by her loving family. Joan was born on March 28, 1932, in Appleton, WI, daughter of the late Robert and Myrtle (McFaul) Witt. Shortly after graduating from Appleton High School, she married Donald Van Handel on September 30, 1950.

Joan enjoyed keeping a happy and comfortable home for her seven children. She was part of the local 4-H club, homemakers club, and was a proud charter member of St. Thomas More Catholic Church. After her children were grown, Joan worked at the family business, Van Handel Excavating, until 2015.

Joan loved being “up north” at the family cottage in Townsend. She also loved family gatherings; every holiday, birthday, and accomplishment were celebrated with joy! Her hobbies included making plastic canvas gifts and homemade bread.

Joan cherished the time she spent with her grandchildren and great grandchildren. She especially liked the babies. Even when age made her arms weak, she always found the strength to hold and cuddle them.

Travel was a large part of Joan’s life; traveling across the United States as well as parts of Europe. Over the years, Joan and Donald never missed an opportunity to try something fun and new; golfing, motorcycling, snowmobiling to name a few.

The Funeral Liturgy for Joan will take place at 11:00 am on July 7, 2022, at ST. THOMAS MORE CATHOLIC CHURCH (1810 N McDonald St. Appleton). Visitation will be held from 9:00 am until the time of Mass. Online condolences may be expressed at www.wichmannfuneralhomes.com. In lieu of flowers, a memorial fund will be established in Joan’s name.

The family would like to give special thanks to Dr. Patrick Mannebach, Right at Home and Heartland Hospice for the wonderful care and compassion they provided for Joan.

To order memorial trees or send flowers to the family in memory of Joan B Van Handel, please visit our flower store.