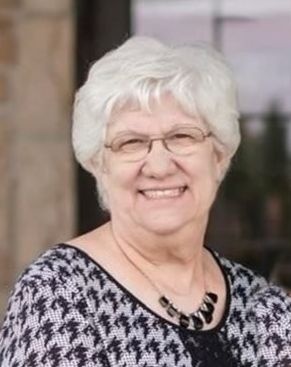 Joan Louise Johnston, age 78, passed peacefully at home Sunday, July 31st.  Joan was born in New Jersey, daughter of Frank and Mary (Carroll) Van Steenbergen.  Joan met the love of her life, Donald Johnston, on Waikiki Beach in Hawaii.  She was vacationing and he was in the US Marines and stationed there.  They wed in 1967 and moved to Wisconsin.  Joan and Donald shared 31 years of marriage and raised two beautiful children.  Sadly, Donald passed in March of 1998.
Joan was a stay-at-home mom while her children were young.  As they grew older, Joan accepted jobs as a receptionist in both a bank as well as the hospital.  She retired as a phone dispatch operator for Thedacare On Call.
Joan was guided through life by her strong Catholic faith; volunteering at the warming shelter and serving dinner after funerals at Holy Spirit Catholic Church.  Above all, she cherished the time she spent with her family.
Joan will be missed by her children: Steve (Laurie) Johnston and Karen (Brian) Tuttle; grandchildren: Jessica (Matthew) McDonald, Justin (fiancé Devon) Johnston, Jenna Johnston, Jordyn Johnston, and Jonathon Tuttle; and great grandchildren: Dalilah and Emery Johnston, and Rowan McDonald.  She is further survived by her siblings: Carol and Paul (Joanne) Van Steenbergen; and very special family friends, the Sewall family.  She was preceded in death by her parents: Frank and Mary Van Steenbergen; husband: Donald Johnston; and infant son: Michael Johnston.
The memorial service for Joan will be held at 6:00pm on Monday, August 8, 2022, at WICHMANN FUNERAL HOME -DOWNTOWN, 537 N. Superior St. with Deacon C.F. Dedman officiating.  Visitation will be from 3:00pm until the time of service.
To order memorial trees or send flowers to the family in memory of Joan Louise Johnston, please visit our flower store.