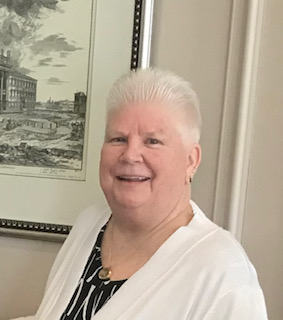 Jenny was born in Little Chute to Joseph and Sylvia Strick on May 3, 1950.  She attended Kimberly High School where she developed a love of music and education that would continue throughout her life.  She married Dennis Schubring on July 14, 1976 in Combined Locks at St. Paul’s Catholic Church.  She went on to further her education at the University of Wisconsin Oshkosh.  In her professional career Jenny began by teaching in Chilton and continued as an educator in various school districts in numerous different roles.  Jenny eventually found her calling in the Catholic Church, where she was a Religious Education Coordinator – a role she cherished and continued working in up to her final days.  This truly wasn’t work for Jenny; her faith was an identity and driving force in her life where she was able to positively affect so many people over the years.  Outside of work, Jenny’s greatest passion in life was seeing and spending time with her three grandchildren who she enjoyed taking numerous day trips with and saw her every Sunday afternoon for dinner.  She was also passionate about gardening and maintaining a beautiful yard; something that gave her great joy over the years.

Jenny was known for having an infectious laugh.  She was extremely warm and caring –always there for anyone in a time of need, regardless of her own situation.  She spent many years as the caretaker of her late husband, viewing this not as a burden, but rather an honor and sign of her unwavering love and commitment.  She enjoyed playing guitar and singing, which brought a smile to anyone who was lucky enough to hear it.  Jenny also loved baseball in all its forms; from watching the Brewers in person or on TV to attending her grandson’s games (which she never missed).   She was an amazing baker and shared this love with her granddaughter who made Christmas cookies with her every year since she was old enough to roll out the dough.  Jenny cherished spending time with her friends and co-workers / interparish family – sharing stories, creating memories, and laughing every step of the way.

In lieu of flowers, a memorial fund is being established in Jenny’s name.  Jenny’s family would also like to extend a thank you to the staff of ThedaCare Regional Medical Center in Appleton for their extreme care and kindness.

The funeral liturgy for Jenny will be held at St. Joseph Catholic Church, 404 W. Lawrence Street, Appleton, WI on Saturday, January 8th at 11:00 AM with Fr. Gerry Pehler, O.F.M. Cap. officiating.  For those unable to attend, there will be a live stream on St. Joe’s YouTube channel.   Visitation will be held at the church from 9:00 AM until the time of service. Interment at St. John Cemetery in Little Chute at a later date.

To order memorial trees or send flowers to the family in memory of Jennifer R. "Jenny" Schubring (Strick), please visit our flower store.