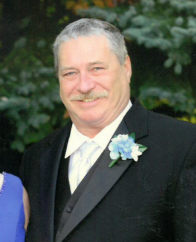 Jeffrey “Pyra” William Last, age 70 of Kimberly, WI passed away Friday, April 8, 2022 following a courageous battle with COPD.  He was born in Appleton, WI to Charles and Jean (Thomack) Last on January 8, 1952.  Jeff graduated from Kimberly High School in 1972, going on to work as a maintenance millwright for the Kimberly mill for over 30 years until its closure in 2008.  On July 30, 1976, he married the love of his life, Vicky Van Eyck at the Immanuel United Church of Christ in Kaukauna.  Together, they raised their two sons.

Jeff enjoyed camping, NASCAR, golf, hunting, cribbage, antique car shows, and snowmobiling.  He was a master with fireworks, which is how he earned his fitting nickname, “Pyra”.  He employed his pyrotechnic skills every year on the 4th of July, where he’d celebrate not only the birth of his country, but also the birth of his granddaughter.  Jeff loved his family more than anything else, though, and would spend as much time with them as he could.

Jeff is preceded in death by his parents, Charles and Jean Last; brother, Greg Last; and his parents-in-law, Nick and Arlene Van Eyck.

A celebration of Jeff’s life will be scheduled at a future date.

The family would like to extend a special thanks to Appleton Medical Center, the Thedacare At-Home Staff, and Dr. Travis Kroner for their wonderful care and compassion they showed Jeff.

To order memorial trees or send flowers to the family in memory of Jeffrey W. Last, please visit our flower store.